Posted by tin Posted on 5:05 PM with No comments 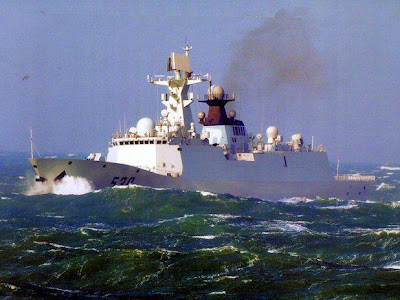 As five other countries claim ownership of the Spratly Islands in the South China Sea, and its supposed billions in oil and gas deposits, China's backing its claim by sending the newest warship it has to the region.
The Taiwan-owned China Times reports the Liuzhou Type 054A warship entered the South China Sea Fleet of China's PLA Navy, making it the sixth 054 warship in the area.

Though the Type 054A is not a new design, this most recently commissioned vessel will have the latest technological advantages.

Liuzhou is currently considered one of China's most advanced surface combat Type 054A vessels. It has a stealthy hull design with sloped surfaces and radar absorbent materials. Equipped with a medium-range air defense missile system, the vessel is capable of destroying air targets at a distance up to 50 km. Although it is not as lethal as the Russian-built Sovremenny class and domestic destroyers, the new frigate still serves well as a multi-role warship in the Chinese fleet.

Among all 16 frigates in the same class and currently in the service of the PLA Navy, Liuzhou is the newest addition. Since Liuzhou is commanded by the South Sea Fleet, which is based in Zhanjiang of Guangdong province, analysts believe that its primary mission is to protect Chinese interests in the disputed South China Sea. The mainland and five other countries — Taiwan, Vietnam, the Philippines, Malaysia and Brunei — have competing claims to the region's islands and atolls.

The Liuzhou's deployment comes days after the U.S. vowed to increase its military presence in the Philippines and China's ensuing outrage over the decision.

The warship carries an array of sophisticated weapons including anti-submarine ordnance and stealth features allowing it to evade radar and move undetected.