Posted by tin Posted on 11:39 PM with No comments 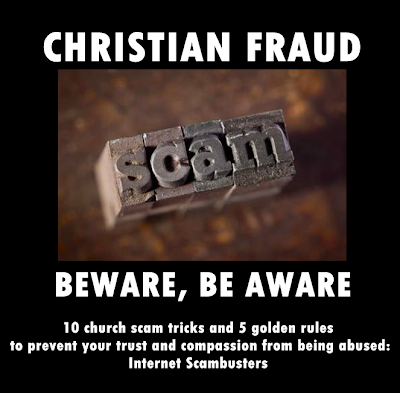 Church scam tricks exploit trust and cost their victims millions of dollars every year, so much so that one state has named one variety of this type of crime its number one scam.
Yet by applying some commonsense measures, most of these con tricks can be avoided -- whether you're a member of a religious organization or on the receiving end of a bogus request for help.In this issue, we highlight the 10 most common types of religious scams and give you our five golden rules for avoiding them.


LET US PREY: HOW CHURCH SCAM ARTISTS GET AWAY WITH MILLIONS

The trusting nature of many religious worshippers, and, often, their fervent wish to help others, have opened the floodgates to an evil deception -- the church scam.

Church scams can happen when members of a congregation, a church, temple or mosque, or even a whole religious organization, are fooled into parting with their money either for a supposedly profitable investment or simply to support an individual who claims to have fallen on hard times.

Tens of millions of dollars have been plowed by individuals into hopeless projects that have turned out to be Ponzi schemes.

In other religious scams, churches have been left with thousands of dollars of debt after being hoodwinked into signing costly leases for equipment they thought was free.

"Affinity" simply means something like "a shared understanding, interest or belief." And claiming to share someone else's viewpoint is the sneaky cover many church scam artists use.

Pretending to share their faith lulls members of religious organizations into thinking a scammer is genuine.

Often claiming some kind of divine guidance, using religious slogans, or claiming to be raising funds for a religious or other worthy cause, church scammers invite their new "friends" to invest in what turns out to be nothing more than a Ponzi scheme paying for their personal lifestyle.

This is such a huge and common crime that the state of Arizona just listed affinity scams of this type as its number one scam for 2009.

And in one recent nationwide religious scam, churchgoers are said to have lost more than $50 million in a phony gold bullion scheme, promoted on daily telephone "prayer chains," in which they thought they could earn a huge return.

In the bullion case, for example, the amount of precious metal said to be involved was greater than the gold reserves held by the United States!

In a way, this religious scam is a variation of the affinity scam. It just happens at a personal level and usually involves less money.

A newcomer turns up at church. They may profess to be recently converted to the faith and claim this has changed their lives.

Sometimes immediately, sometimes over a lengthy period of time, they tell a story of a struggle against hardship or a recent tragedy.

Typical examples are stories about needing to travel across country to reunite with family they haven't seen for years or to attend a parent's funeral, or claims to be suffering from a terminal illness.

Recent news reports have highlighted several variations of this type of church scam, in which religious organizations sign up to use equipment for what they believe to be little or no cost.

Typically this may involve computers, photocopiers or other technology.

Sometimes the organizations are told they have to pay upfront but that their costs will be reimbursed by a sponsor, who fails to materialize.

Other times, fees and other costs are hidden in the fine print of an agreement or lease.

And on yet other occasions, churches have replaced equipment leased to them via a third party (i.e., not the original supplier or manufacturer).

The third party -- the scammer in this case -- does not return the equipment to the supplier or cancel the original lease. They sell the equipment instead.

In one case, a church with two photocopiers discovered it owed money on 14 leases!

--If you belong to a religious organization, here are a few more scams to beware of:

--Using a church as a drop-off. The scammer orders equipment in the name of a church, then waits for the item to be left on the step, knowing no one will be there.

--Hijacking of the church's email account, which is then used to send out phony distress messages (for example, from the pastor) asking for money to be wired.

--A "Nigerian" scam in which church members are told they are entitled to buy cut-price cars or other equipment, supplemented by a religious bequest. Again, they have to wire cash in advance.

--"Gifting clubs" -- a sort of pyramid scheme, where new members contribute money in the hope that they too will get cash by recruiting more members. These are illegal.

HOW TO CHURCH SCAM:


1.The most common adage applies to affinity and equipment-related church scams -- if it seems too good to be true, it probably is.

2.Never believe someone is who they say they are, or that their claims are true, without independent proof.

3.Never wire or donate cash unless you are 100% sure who the recipient is.

4.Always read the small print of any agreement you are signing. Discuss it with others -- don't rush.

5.Carefully check out the credentials of any organization you are dealing with, whether they're investment firms or equipment suppliers.