Home » Illuminati » DENVER INTERNATIONAL WAS DESIGNED AND BUILT BY THE ILLUMINATI AS THE HEADQUARTERS FOR THE "GLOBAL GENOCIDE" THAT WILL TRIGGER THE NEW WORLD ORDER?

DENVER INTERNATIONAL WAS DESIGNED AND BUILT BY THE ILLUMINATI AS THE HEADQUARTERS FOR THE "GLOBAL GENOCIDE" THAT WILL TRIGGER THE NEW WORLD ORDER?

Posted by tin Posted on 2:30 AM with No comments 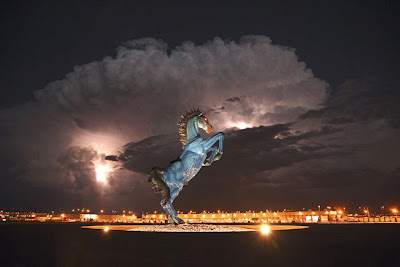 A bizarre report prepared by the Federal Service for Military-Technical Cooperation that is circulating in the Kremlin last summer on the joint US-Russia military drills
taking place last May in the State of Coloradosays that the plans received from the Americans call for Russian Airborne Troops (VDV) during this strange exercise to “take and hold” the Central Intelligence Agencies (CIA) main facility, the National Security Agencies (NSA) main facility and the Denver International Airport (DIA).

The Federal Service for Military-Technical Cooperation is a federal body of executive authority responsible for monitoring and supervising the Russian Federation’s international military-technical cooperation.

Russian Defense Ministry spokesman Colonel Alexander Kucherenko publically announced this 24-21 May “anti-terror drill” this Friday past noting that this will be the first time Russian airborne forces have held exercises with the US airborne forces on US territory. Colonel Kucherenko stated, “According to the exercise scenario, soldiers of the two countries will hold a tactical airborne operation, including the reconnaissance of imaginary terrorists’ camp and a raid. After the operation, a helicopter will evacuate the soldiers.” He further added that Russian airborne troops would be training with US special service weapons in these drills in Fort Carson, Colorado.

Puzzling to Russian military analysts about this exercise, this report says, are that according to the American plans, Russian airborne troops (using US weapons that they had previously trained with at Fort Carson) will fly to and than parachute from their planes having the objectives of seizing the CIA’s main computer facility in Denver, the NSA’s main computer facility in Bluffdale, Utah, and taking control of main runways and terminals of the Denver International Airport.

The purpose of seizing the Denver International Airport, this report continues, is for the evacuation of the key personal and equipment previously “freed” from the CIA’s Denver base, and the NSA’s base in Utah, who were, supposedly, under “imminent threat” from an unspecified enemy, according, that is, to the American scenario for this war game.
Don't Click This If you Love Your Job!

The Denver International Airport [photo 2nd right], aside from being the biggest airport in the United States, and having that countries longest runway, deserves special mention since it has been embroiled in controversy since it opened in 1994, and as we can, in part, read:

“On the surface, Denver International Airport seems like any other modern airport. It’s new, it’s clean, it’s big, and it’s modern. But some investigators have found more to it than meets the eye. Much more. Claims abound that Denver International was designed and built by the Illuminati as the headquarters for the global genocide that will trigger the New World Order.

An Internet search for “Denver airport conspiracy” reveals that there is a lot of talk about this, and that the specific claims and observations are numerous. Here’s an overview of the basics. According to the conspiracy theorists, Denver already had a fine airport, Stapleton International. But despite widespread protests, Denver International was built and opened in 1995, with fewer runways, thus reducing Denver’s capacity.

Its construction began with five mysterious buildings that were completed and then buried intact, with the cover story that they were “built wrong”. Up to 8 levels of underground facilities are said to exist, and workers who go there refuse to answer questions about what they do. The entire airport is surrounded by a barbed wire guard fence, with the barbed wire angled inward, to keep people in, like a giant prison, not out like at other airports. And if viewed from the air, the runways are revealed to be laid out in the shape of a Nazi swastika. Questions about what the government might be doing in this underground base may have been answered in 2007, when fourteen commercial aircraft reported spontaneously shattered windshields as the presumed result of electromagnetic pulses.

Indoors, the airport gets even stranger. The Illuminati appear to have detailed their plans for global genocide and a New World Order in two large murals. The first depicts a huge Nazi soldier with dead women and children scattered around him [photo bottom left], and the second shows Third World populations dying, a few elite species protected from the apocalypse in sealed containers, and the Mayan symbol for 2012 presiding over all.

In the floor near the murals is written “Au Ag”, the abbreviation for the deadly toxin Australia Antigen, evidently the Illuminati’s weapon of choice to accomplish the genocide. On other places, strange words in an unknown (possibly alien) language are written on the floors (“DZIT DIT GAII” and others). Most telling of all is the granite monument that the airport claims is a time capsule. It’s emblazoned with the symbol of the Freemasons, well known among conspiracy theorists to be a major arm of the Illuminati, and engraved with the words “New World Airport Commission”.

And finally, the Queen of England, another alleged Illuminatus, has been secretly and anonymously buying up the property surrounding the airport.”

Also interesting to note, this report says, is that this entire exercise will be overseen by the “drone army” owned and operated by the University of Colorado who have over the past few years has applied for and obtained over 100 Certificate of Authorization’s (COA) from the US government to fly their pilotless surveillance aircraft for reasons still as yet unknown.

To the most puzzling question in the minds of Russian military analysts, this report concludes, is why the Americans are using Russian airborne troops to be the “protectors” of these vital US intelligence resources instead of the “aggressors” as has always been the case historically. One speculation in this report, however, does note that the scenario to be played out in late May, in Colorado, as planned by the Americans, does, indeed, mirror similar plans of the Russian General Staff of actions to be taken in the case of sudden civil war where “outside forces” would be called upon to protect the government from overthrow by internal forces or armed rebellion by the military.
Tweet