Home » Illuminati » THE 10 COMMANDMENTS OF THE NEW WORLD ORDER

THE 10 COMMANDMENTS OF THE NEW WORLD ORDER

Posted by tin Posted on 9:49 PM with No comments 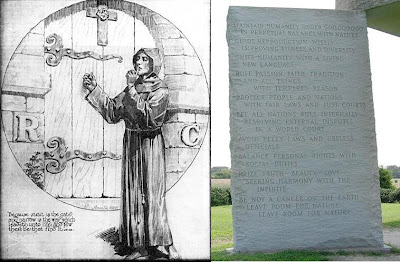 The English version of the GuidelinesThe ten guides for a new Age of Reason are as follows:1. Maintain humanity under 500,000,000 in perpetual balance with nature.

4. Rule passion – faith – tradition – and all things with tempered reason.

5. Protect people and nations with fair laws and just courts.

As you can see, the guidelines call for a drastic reduction of the world population, the adoption of new a world language, the creation of a world court and a vague allusions to eugenics. In other words, a blueprint for a New World Order.

The first “commandment” is particularly shocking, since it basically stipulates that 12 out of 13 people on Earth should not exist; basically, that would mean everybody in the world would disappear except half of India. If today’s world population is 6,7 billion, then that is a 92.54% surplus. To consider these figures is mind-boggling. But then, how many people survived in the movie 2012? Not many. Who were they? The earth’s wealthiest people. Is this predictive programming?

Massive depopulation is an admitted goal of the world’s elite and many important people have openly called for it:

In 1988, Britain’s Prince Philip expressed the wish that, should he be reincarnated, he would want to be “a deadly virus” that would reduce world population. More recently, Bill Gates said “The world today has 6.8 billion people … that’s headed up to about 9 billion. Now if we do a really great job on new vaccines, health care, reproductive health services, we could lower that by perhaps 10 or 15 percent.” Along with tax-deductible donations of enormous amounts of money to help the depopulation cause, “secret meetings” of the world’s elite have been taking place to discuss those issues:

“Some of America’s leading billionaires have met secretly to consider how their wealth could be used to slow the growth of the world’s population and speed up improvements in health and education.

The philanthropists who attended a summit convened on the initiative of Bill Gates, the Microsoft co-founder, discussed joining forces to overcome political and religious obstacles to change.

Described as the Good Club by one insider it included David Rockefeller Jr, the patriarch of America’s wealthiest dynasty, Warren Buffett and George Soros, the financiers, Michael Bloomberg, the mayor of New York, and the media moguls Ted Turner and Oprah Winfrey.”The Sunday Times, May 24th 2009

The second rule (“Guide reproduction wisely – improving diversity and fitness”) basically calls for the inference of lawmakers into the management of family units. If we read between the lines, it requires to creation of laws structuring the number of children per family. Furthermore, “improving diversity and fitness” can be obtained with “selective breeding” or the sterilization of undesirable members of society. This used to be called “eugenics”, until it became politically incorrect because of the Nazis.

“Some even believe we are part of a secret cabal working against the best interests of the United States, characterizing my family and me as ‘internationalists’ and of conspiring with others around the world to build a more integrated global political and economic structure – one world, if you will. If that’s the charge, I stand guilty, and I am proud of it.”-David Rockefeller, “Memoirs of David Rockefeller” p.405

Most of the other rules of the Guidestones basically call for the creation of a world government, ruled by an “enlightened few”, who would regulate all aspects of human life, including faith, social duties, economy, etc. This idea is far from new, as it has been entertained by Mystery schools for centuries. Manly P. Hall wrote in 1917:


“When the mob governs, man is ruled by ignorance; when the church governs, he is ruled by superstition; and when the state governs, he is ruled by fear. Before men can live together in harmony and understanding, ignorance must be transmuted into wisdom, superstition into an illumined faith, and fear into love. Despite statements to the contrary, Masonry is a religion seeking to unite God and man by elevating its initiates to that level of consciousness whereon they can behold with clarified vision the workings of the Great Architect of the Universe. From age to age the vision of a perfect civilization is preserved as the ideal for mankind. In the midst of that civilization shall stand a mighty university wherein both the sacred and secular sciences concerning the mysteries of life will be freely taught to all who will assume the philosophic life. Here creed and dogma will have no place; the superficial will be removed and only the essential be preserved. The world will be ruled by its most illumined minds, and each will occupy the position for which he is most admirably fitted.”- Manly P. Hall, The Secret Teachings of All Ages

In “The Secret Destiny of America”, Hall explains the ancient dream of a world government, as entertained by Secret Societies:

“World democracy was the secret dream of the great classical philosophers. Toward the accomplishment of this greatest of all human ends they outlined programs of education, religion, and social conduct directed to the ultimate achievement of a practical and universal brotherhood. And in order to accomplish their purposes more effectively, these ancient scholars bound themselves with certain mystic ties into a broad confraternity. In Egypt, Greece, India, and China, the State Mysteries came into existence. Orders of initiated priest-philosophers were formed as a sovereign body to instruct, advise, and direct the rulers of the States.”-Manly P. Hall, The Secret Destiny of America.