Posted by tin Posted on 4:00 PM with No comments 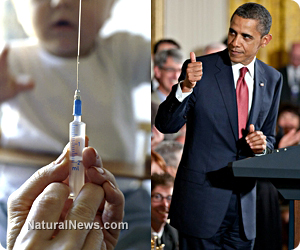 I feel obliged to warn you in advance that unless you're an evil demon who enjoys the suffering of others, you're going to have a VERY hard time reading this article. What you are about to confront here is extremely disturbing, racist, murderous and downright evil. Proceed at your own risk.

Here's the story: It's time to start using American babies as guinea pigs to test a bioweapons anthrax vaccine, concludes a presidential "ethics panel." (Yes, the word "ethics" is not a typo.) Presumably, these will be black babies, as the history of U.S. government medical experiments on American citizens seems to always end up targeting blacks (see below).

The purpose of these medical experiments on U.S. black babies is, of course, to get FDA approval for a "pediatric anthrax vaccine." Never mind the fact that the risk of being exposed to anthrax is practically zero. Is anybody dying from anthrax these days? Are children coming home from school after "catching anthrax" from their friends? Nope.

Anthrax is a non-issue in America. No child needs an anthrax vaccine. This is all one big push by the corrupt government working in collusion with the criminal vaccine industry to use human babies as guinea pigs so that the vaccine industry can sell tens of millions of doses of this vaccine to the government under the guise of "homeland security."

While Big Pharma's medical scientists are no doubt drooling over the prospect of getting a presidential thumbs up for using human babies as live guinea pigs, not everybody is happy about this decision. "[People] ...say the children would be guinea pigs in a study that would never help them and might harm them," reports Reuters.

Reuters goes on to report:

Vera Sharav, founder of the Alliance for Human Research Protection, predicted that such a study would cause "moral harm for us as a nation and suffering for the children. They should have said, 'thou shalt not.'"

In reading this, you might even wonder why they want to use human babies for these experiments instead of the usual primates (lab monkeys). There's a very disturbing answer to that question...

If the above subhead doesn't get you fuming mad, you're not human. Back in 2006, we published a timeline of medical experiments in the United States. Most of the experiments were funded by the U.S. government and carried out on poor people, minorities, prisoners and soldiers. Soon after the publication of this article, I found myself defending the article in a public internet forum, saying something like "why can't they use monkeys instead of humans?" I'm not in favor of animal research either, but I'm even more opposed to medical experiments on people.

The answer I got on the forum was, "Poor black babies are cheaper than monkeys." The statement shocked me, but after I got over the shock of reading that, it turns out that from the point of view of these criminal medical researchers who conduct experiments on humans, it is undeniably cheaper for them to acquire human babies than lab monkeys. The lab monkeys cost tens of thousands of dollars each and are expensive to keep and feed, but a human baby can be picked up for free by any CPS worker, any day of the week. Countless children are "taken" from poor families every day in America, and they often "disappear" without a trace. Some of them, I have long suspected, are used in secret medical experiments. Once the research is done, the human babies can simply be killed and disposed of.

If you find this difficult to believe, you don't know the real story of CPS and child trafficking rings operating across America right now. See this link at InfoWars.com for a recorded interview with a former CPS worker who blew the whistle on child trafficking and was later "suicided."

Here's a YouTube video of the same woman, exposing the crimes of CPS.

Also see this article on CPS corruption and human trafficking.

Not all CPS workers are criminal child traffickers, of course, but this kind of activity does happen in numerous local CPS operations across the country.


The vaccine industry has always abandoned ethics in favor of profits

The vaccine industry, of course, does all this for the sole purpose of making money. No matter how many children must be sacrificed as guinea pigs, the industry wants its FDA-approved "pediatric" anthrax vaccine. For what purpose? "To save lives," they claim. But to save lives, they have to kill a few babies first, and that's okay with Big Pharma as we've seen throughout history.
Tweet