Television Can Destroy Your Mind 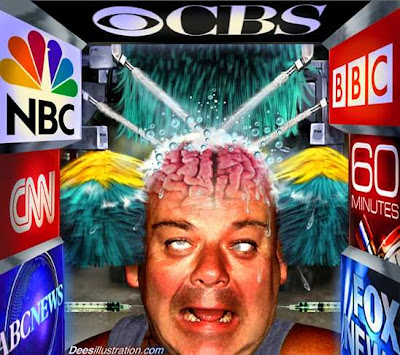 For the first time in history, man has an instrument through which the masses can be taught and controlled effectively, immediately, and effortlessly.
That instrument is TELEVISION, the most devastating brainwashing device ever unleashed upon humanity.

You all may be surprised to see TV here as a means for influencing the mind, but let me tell you guys that it is absolutely true. Television is therefore an excellent example of how to influence the mind due to its effects on the brain.

The Effects Of TV On The Brain
- Watching TV puts the viewer into a highly suggestible sleep like hypnotic state. This provides easy access to the subconscious.
- When you watch TV, brain activity switches from the left side of your brain (responsible for logical thought and critical analysis) to the right side.
This is significant because the right side of the brain does not critically analyze incoming information, instead it uses an emotional response. This means there is little or no analysis of incoming information.
- Right brain activity causes the body to release chemicals which make it feel good (these are called endorphins, a natural sedative with similar properties to heroin).
It is therefore not only possible, but probable, to become physically addicted to TV. This ensures constant daily exposure, a critical factor needed to program the mind.
- Reduces higher brain activity, promoting activity in lower brain regions. In other words it makes you less intelligent and behave more like an animal.
The Brain Thinks TV Is Real!
You may think that TV does no harm because you know it’s not real, but did you know that your subconscious believes it to be real? (This is why your heart beats faster while watching horror films).
Television Brainwashing
As you can see, TV is an excellent tool to program the mind (they call it Television Programming for a reason) It provides easy access to the subconscious, reduces your ability to analyze incoming information and ensures constant daily exposure via a physical addiction.
There are two kinds of brainwashing. The one that’s called  hardbrainwashing is the type you’re most familiar with. You’ve got a pretty good image of it from some of those old Korean war movies. They take some guy, an American patriot, drag him into a room, torture him, pump him full of drugs, and after a struggle, get him to renounce his country and his beliefs. He usually undergoes a personality change, signified by an ever-present smile and blank stare.
This brainwashing is called hard because its methods are overt. The controlled environment is obvious to the victim; so is the terror. The victim is overwhelmed by a seemingly omnipotent external force, and a feeling of intense isolation is induced. The victim’s moral strength is sapped, and slowly he embraces his torturers. It is man’s moral strength that informs and orders his power of reason; without it, the mind becomes little more than a recording machine waiting for imprints. No one is saying that you have been a victim of hard brainwashing. But you have been brainwashed, just as effectively as those people in the movies. The blank stare? Did you ever look at what you look like while watching television?
If the angle is right, you might catch your own reflection in the screen. Jaw slightly open, lips relaxed into a smile. The blank stare of a television zombie. This is  soft  brainwashing, even more effective because its victims go about their lives unaware of what is being done to them.
It works on a principle of tension and release. Create tension, in a controlled environment, increasing the level of stress. Then provide a series of choices that provide release from the tension. As long as the victim believes that the choices presented are the only choices available, even if they are at first glance unacceptable, he will nevertheless, ultimately seek release by choosing one of these unacceptable choices. Under these circumstances, in a brainwashing, controlled environment, such choice-making is not a ”rational” experience. It does not involve the use of man’s creative mental powers; instead man is conditioned, like an animal, to respond to the tension, by seeking release.
The key to the success of this brainwashing process is the regulation of both the tension and the perceived choices. As long as both are controlled, then the range of outcomes is also controlled. The victim is induced to walk down one of several pathways acceptable for his controllers. The brain-washers call the tension-filled environment “social turbulence”. The last decades have been full of such social turbulence: economic collapse, regional wars, population disasters, ecological and biological catastrophes. Social turbulence creates crises in perceptions, causing people to lose their bearings.
Adrift and confused, people seek release from the tension, following paths that appear to lead to a simpler, less tension-filled life. There is no time in such a process for rational consideration of complicated problems. Television is the key vehicle for presenting both the tension and the choices. It brings you the images of the tension, and serves up simple answers. Television, in its world of semi-reality, of illusion, of escape from reality, is itself the single most important release from our tension-wracked existence. Eight hours a day, every day, through its programming, you are being programmed.
5-6 Hours Of Programming A Day
On average people watch 5-6 hours of TV a day. This amount of TV will make it almost impossible to reprogram your own mind (unless viewing is eliminated or reduced).
This figure is only an average, many people (especially children) watch far more than this.
You might not actually realize how much you are watching television. But think for a moment. When you come home, you turn the television on, if it isn’t on already. You read the paper with it on, half glancing at what is on the screen, catching a bit of the news, or the plot of a show. You eat with it on, maybe in the background, listening for a score or something that happens to a character in a show you follow.
This not only programs their mind from an early age, but may also damage their brain causing them to grow up and behave more like an animal than a human (i.e driven by basic desires such as sex, violence and food).