Home » news » Thousands of Tausug from Basilan, Sulu and Tawi-Tawi have sailed to Sabah

Thousands of Tausug from Basilan, Sulu and Tawi-Tawi have sailed to Sabah

Posted by tin Posted on 4:24 PM with No comments 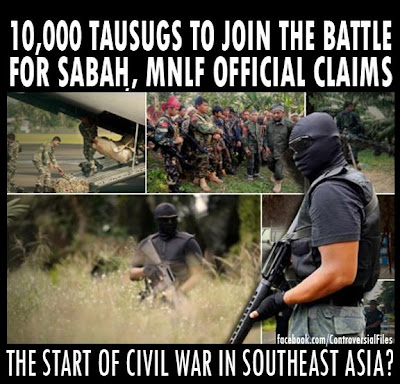 Thousands of Tausug from Basilan, Sulu and Tawi-Tawi have sailed to Sabah to reinforce members of the so-called royal army of the sultanate of Sulu who are fighting it out with Malaysian security forces,
a Moro National Liberation Front official said Tuesday.
“We can no longer prevent our people. We are hurt and many of our people, even the non-combatants, are going to Sabah to help the sultanate,” Habib Hashim Mudjahab, chair of the MNLF’s Islamic Council Committee, told the Philippine Daily Inquirer by phone.

Mudjahab said at least 10,000 Tausug from Basilan, Sulu, Tawi-Tawi and Zamboanga on Monday night started to reinforce the followers of Sultan Jamalul Kiram III now holed up in a coastal village in Sabah via the Philippines’ so-called “southern backdoor,” a route regular traders are familiar with.

He said the reinforcements “sailed in small numbers so they can easily penetrate Sabah unnoticed.”

‘It is about pride and honor, and our people are ready to sacrifice.’

“The naval blockade is of no use; our military should have known that. We did that before at the height of Marcos regime. We can easily go to Sabah and blend with the people there,” he added.

He was referring to a naval blockade thrown up by the Philippine Navy and Coast Guard to ensure armed sympathizers do not joined the beleaguered men in Sabah as reinforcements.

Days ago, Mudjahab said, he advised several MNLF commanders against going to Sabah to help a group of about 200 men who landed in a coastal village in Lahad Datu on Feb 9 to assert the sultanate’s claim to Sabah.

“I told them to hold on to their ranks and avoid getting emotionally affected with the situation. But our President Noynoy (President Benigno Aquino III) kept issuing statements favoring the Malaysians, which made our people agitated. The President must realize that for the Tausugs, being pushed to the wall, fighting for a cause, is dying with victory,” he said.

He said with three old heirs of the Sultanate, “who have no history of rebellion, living quietly on their own, now leading the cause in Sabah, is something great for the Tausugs.”

“It is about pride and honor, and our people are ready to sacrifice,” Mudjahab said.

Ajil Jaffar, 50, an oil palm plantation worker in Kota Kinabalu and who was among those repatriated to the country on Sunday, said he wanted to return to Sabah.

“I want to help them. It’s our honor to be with the sultan so that this deportation and abuses will stop,” he said.

A retired educator in Tawi-Tawi, who asked not to be identified by name, said the sultanate of Sulu represents an extension of their rich heritage. “They are the first Filipinos. The sultanate of Sulu was already there even before Philippines existed,” he said.

Amirah Lidasan of the non governmental group Suara Bangsamoro said the status of the sultanate of Sulu was unfinished business that “keeps on nagging us.”

“We have a bloody history of Moro people getting killed while defending the homeland. It also speaks of the Philippine government’s giving in to the interest of foreigners instead of its citizens,” Lidasan said. -Agencies
Tweet