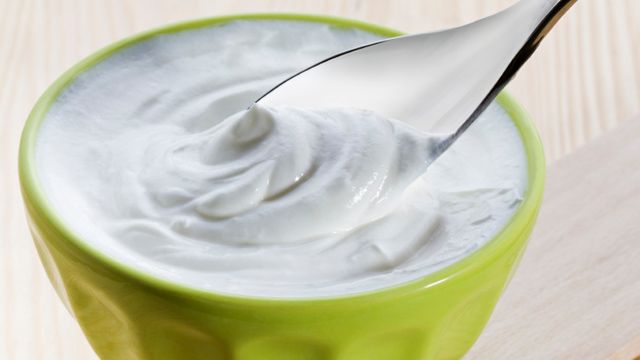 For every container of Greek yogurt you see on a supermarket shelf, picture another container (or two or three) of deadly poison. It’s called acid whey, and it’s a toxic byproduct from the yogurt-making process that’s becoming a big problem for manufacturers as their product continues its assault on the hearts and minds of health-conscious Americans.

Never heard of "acid whey?" Neither had we. Modern Farmer explains:

It’s a thin, runny waste product that can’t simply be dumped. Not only would that be illegal, but whey decomposition is toxic to the natural environment, robbing oxygen from streams and rivers. That could turn a waterway into what one expert calls a “dead sea,” destroying aquatic life over potentially large areas. Spills of cheese whey, a cousin of Greek yogurt whey, have killed tens of thousands of fish around the country in recent years.

The scale of the problem—or opportunity, depending on who you ask—is daunting. The $2 billion Greek yogurt market has become one of the biggest success stories in food over the past few years and total yogurt production in New York nearly tripled between 2007 and 2013. New plants continue to open all over the country. The Northeast alone, led by New York, produced more than 150 million gallons of acid whey last year, according to one estimate.(Emphasis mine.)

Possible solutions to the acid whey problem include farmers mixing it with cattle feed, incorporating it into fertilizer, or making biogas from it. Another is using it to make baby-food. But nobody’s really figured it out. As Cornell dairy scientist Dave Barbano toldModern Farmer: “Because the Greek yogurt production grew so rapidly, no one really had the time to step back and look at the other viable options."

The cheese industry has solved its whey problem by selling the stuff to companies that make body-building supplements. But the "sweet whey" produced from cheese-making is richer in protein than acid whey, and therefore easier to process.

For now, it remains a mystery what will become of all that whey. But by all means, keep eating the Greek yogurt and feeling good about yourself.