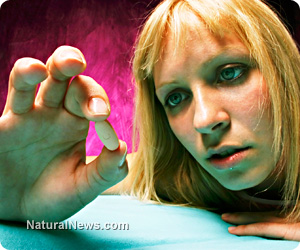 Drug giant Johnson & Johnson (J&J), whose pharmaceutical and medical device products have been implicated in dozens of major recalls throughout the past several years, has announced it will seek approvals from the U.S. Food and Drug Administration (FDA) for 11 new drugs by the year 2017. And one of these new drugs, known as esketamine, contains a compound that is almost exactly the same as the active ingredient in the mind-altering party drug "Special K."

The controversial ingredient is known as ketamine, and while J&J's esketamine for depression is a slightly tweaked version of this psychoactive compound, its effects on the human body are amazingly similar. According to reports, esketamine's psychedelic properties take effect within just a few hours, as opposed to several weeks or even months for standard antidepressant drugs. And if used in excessive doses, esketamine can lead to short-term psychosis.

Last fall, researchers from Yale University and the National Institute of Mental Health discovered that actual ketamine from Special K can help relieve major depressive symptoms by potentially forming new nerve cells in the brain that regulate emotion and mood. Not surprisingly, these findings coincide directly with J&J's efforts to capitalize on this same compound by creating its own patented form of it.

Will esketamine be used to get depression patients 'high,' make them feel better through hallucination?

This same study revealed that, unlike existing antidepressants, ketamine can actually help induce the regeneration of new synapses in the brain. Within just two hours, trial participants who took ketamine were observed to have an increased production of synapse-associated proteins. And within 24 hours, completely new synapses were found to have formed in the brains of those who were previously lacking in these important neural connections.

"The hope is that this new information about ketamine is really going to provide a whole array of new targets that can be developed that ultimately provide a much better way of treating depression," said Ron Duman, a psychiatrist and neurobiologist at Yale University who helped work on the research. The discovery "represents maybe one of the biggest findings in the field over the last 50 years," he added, as quoted by NPR.org.

Human clinical trials involving esketamine are ongoing, and J&J's Janssen Research & Development, LLC is the division sponsoring them. J&J is also currently in the process of seeking FDA approval for drugs to treat hepatitis C, immune diseases, and schizophrenia; and vaccines for influenza, rabies, and polio.

"Pharma is now J&J's most attractive segment because they have moved past patent expirations and have a large number of new products," says Jeff Jonas, an analyst at investment brokerage Gabelli & Co., noting that J&J's consumer products and medical device divisions have suffered due to an excess of safety recalls in recent years.