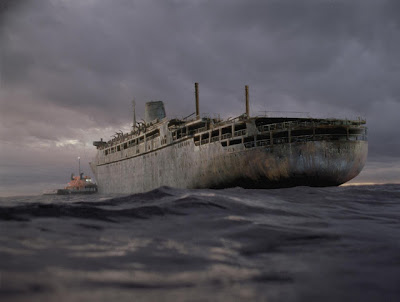 Well, this is spooky. An abandoned and possibly toxic cruise ship, lost somewhere in the North Atlantic, seems to have vanished from the high seas.

The Russian-made Lyubov Orlova left Canada bound for a scrapyard in the Dominican Republic on Jan. 23, according to the Agence France-Presse. After only one day, however, a cable snapped, leaving the ship adrift. The so-called “ghost ship” was located briefly in February as it floated aimlessly about 500 miles off the coast of Ireland. Then, in March, the Canadian Coast Guard reported that one of the ship’s emergency radio beacons, which activate after hitting the water or another object, flashed a location almost 800 miles off Newfoundland, according to the Vancouver Sun.

With no further sightings, some speculate that the ship has sunk.

Canada, for its part, doesn’t seem too broken up over the loss, as the boat had been abandoned in Canadian waters in 2010 after a reported financial dispute between the owner and a charter company, per Fox News. Once the ship drifted into international waters, the Canadian government largely washed its hands of the issue. As The Globe and Mail reported back in February, Canada’s transportation department said in a statement it was “very unlikely that the vessel will re-enter waters under Canadian jurisdiction.”

The boat’s whereabouts have received a good deal of attention in the international press, and the mystery surrounding the vessel has even spawned a website, “Where is Lyubov Orlova?”

On a sobering note, however, if the boat has wrecked somewhere, it could be leaking toxic fluids into the water, according to French environmental organization Robin du Bois.

“In case of a collision or sinking or any accident, the Lyubov Orlova will immediately release fuel … other toxic liquids, asbestos … mercury and other non-degradable floating waste,” the group declared in a statement, according to LiveScience.