Home » » Texas pastor: Donate to fix my helicopter and get a new car from God

Texas pastor: Donate to fix my helicopter and get a new car from God

Posted by tin Posted on 5:10 PM with No comments 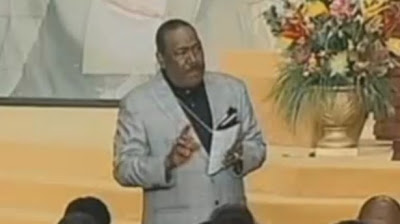 A Texas pastor is being accused of “blasphemy” after he sent out a fundraising plea promising that God would give a new car in “52 days or 52 weeks” to anyone who chipped in $52 to fix his helicopter.

“Do you need better transportation?” New Light Church Bishop Ira V. Hilliard asks in a letter obtained by The Smoking Section. “Do you have a dream vehicle or luxury automobile you long to purchase?”

“We have an urgent transportation need that the Lord said can be an opportunity for you to see His favor and His wisdom released to help you,” he continues. “Scripture teaches when you give to a Kingdom need God will raise up someone to use their power, their ability and their influence to help you.”

Hilliard says that he was excited when the “small voice of the Holy Spirit” told him that God would “release favor” for anyone who helped upgrade the blades on the church’s helicopter.

“I believe with all my heart this message is for you and your doing something today is the key to releasing this favor on your transportation situation!” the letter states. “Send me the transportation need or your dream you have by completing the online petition when you sow a $52.00 transportation favor seed believing in 52 days or 52 weeks you will experience a breakthrough favor!”

Sugarland Pastor Saiko Woods disagrees with the fundraising plea, but told KRIV that there was “nothing wrong with Christians being rich as long as their riches are being founded upon the scriptures or they earn it honestly.”

But Woods insisted that “$52 dollars for 52 weeks or with 52 days” was “totally blasphemy.”

“Gospel is the death burial and resurrection of Jesus Christ. Not you promising money blessings a bigger house a bigger car a jet whatever these things might be,” he explained. “It causes people to look at Christianity and to laugh at it or to make a mockery of it thinking Christianity is all about money.”

In a statement on Friday, New Light Church said that it was “not uncommon for an appeal to be directed toward specific Kingdom projects or specific needs.”

“In this instance, the appeal was directed to our Special Partners and friends who are familiar with the Biblical principles upon which we base our faith,” the church added. “We sincerely regret if anyone was offended by this appeal in that it was not our intent.”

Aviation experts estimated the value of the church’s helicopter at $1 million. New Light also owns a Hawker jet valued at $2 million and an aviation hangar valued at $3 million.