Home » Politics » THE CONTINUED STUPIDITY OF THE GOVERNMENT SHUTDOWN

THE CONTINUED STUPIDITY OF THE GOVERNMENT SHUTDOWN

Posted by tin Posted on 5:54 PM with No comments 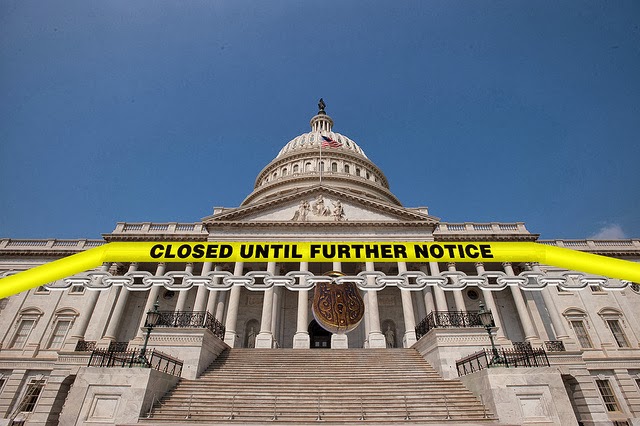 Last night, a week after the start of the aggressively futile, pointless government shutdown. Barack Obama addressed the American people. He explained—he loves explaining things—that he and the Congressional Democrats were perfectly willing to sit down and talk about everything they disagree over, but first Republicans were going to have to agree to end the shutdown and also to raise the debt ceiling, which is arguably more important for the economy. This is how Obama phrased his offer to negotiate:

“I am happy to talk with [Speaker of the House John Boehner] and other Republicans about anything… [but] having such a conversation, talks, negotiations shouldn't require hanging the threats of a government shutdown or economic chaos over the heads of the American people.”

That might sound reasonable if you’re on Team Democrat, but conservative media outlets like theDaily Caller heard something different:

“President Barack Obama tried Tuesday to sway the public’s jaundiced view of the budget crisis with a mishmash of economic threats, campaign-style attacks on Republicans’ repeated offers of budget talks and numerous promises to reject any compromise […] Obama slammed the GOP as deadbeats and extremists, as kidnappers, as unserious and insincere […] The stream of invective and contempt reassures his supporters and motivates them to turn out in the 2014 election, but boosts the GOP’s long-standing distrust of the president’s willingness or political ability to negotiate.”

That underscores the absurd stupidity of the situation Republicans and Democrats are in—it’s hard to have a reasonable discussion when you occupy entirely separate universes. The two sides don't even agree on who is losing the most from the shutdown. In the world of hard-right commenters like Erick Erikson, “Republicans are winning the shutdown fight, and Democrats know it,” while the Democrats can look at the polls and conclude that voters actually blame the GOP more than anyone else for the shutdown.

But those are national polls. In the much smaller world of the districts that elected the Tea Party Republicans who are behind the get-rid-of-Obamacare-or-we-shut-the-whole-fucker-down strategy, everyone is super pumped about the current stalled state of affairs. Representative Ted Yoho of Florida is getting enthusiastic pro-shutdown messages of support from his constituents, and only a few Tea Party members of the House are facing anything that could be called a backlash—the rest can look around and think, Hey, we're really kicking some ass here.

In that universe, the debt ceiling isn’t as big a deal as Obama makes it out to be. The simplest way to explain what is going on is to quote Josh Barro of Business Insider: “Raising the debt ceiling allows the federal government to incur more debt to pay bills it already agreed to pay… When you raise the debt ceiling, that allows the federal government to keep borrowing money to pay for things like Social Security checks and employee salaries going forward.” That sure sounds like something we should do! But Rand Paul and other “default deniers” claim that the US Treasury could just make sure that payments are made on the interest accrued by America’s debt, salaries for the military, and entitlement programs like Social Security. They claim the US won’t default on any of its debts while waiting for its two political parties to sort everything out.

The Treasury Department itself says it can’t do that for all kinds of reasons. In any case, a default on US debt would be a disaster for the world’s economy—obviously, the world’s richest, most powerful country should probably not be going, “Hey, we’re not sure if we’re going to pay our bills or not!” The credit rating agency Moody’s and the bank HSBC have said the US will avoid defaulting even if the debt ceiling isn’t raised, but no one seems to know for sure. It seems staggeringly stupid to risk that kind of catastrophe, even if you really, really don't like Obama or the federal government.

Even some conservative writers like John Podheretz (in the freakin’ New York Post!) say the shutdown isn’t working out for the GOP. And there’s no way to argue it's not hurting people across the country. Problem is, a lot of Tea Partiers seem to be caught in a feedback loop—a few right-wing media outlets and Congressmen tell voters shutdown and the threat of default are no big deals and those things are the Democrats’ fault anyway, the voters demand their Congressmen “stand up” to Obama, and a whole wing of the Republican Party is paralyzed by its own misinformation. Needless to say, this is pretty fucking stupid.

As a result, instead of negotiations, what we have here is a game of chicken. Game theorists saythe best way to win chicken is to tell your opponent, as loudly as you can, “I really can’t stop this thing! You’re going to have to be the one to swerve to avoid disaster, because it’s impossible for me!” Either because that’s his master plan or because it’s the only option left to him, Boehner has pretty much adopted this strategy. He’s already admitted he believes that not raising the debt ceiling would be a disaster, but he can point to the Tea Partiers in his caucus and go, “Hey, I don’t want to risk these faults, but these guys, Mr. President, they’re nuts, they don’t give a shit, you’ve got to give them some concessions or they’re going to fuck everything up, I’m totally powerless here…”

Obama would have to be pretty stupid to buy this. An informal count by the Washington Postshows that right now, enough House Republicans are willing to vote with the Democrats to pass a bill that would end the shutdown. But Boehner would have to bring such a bill to the floor first, and he won’t do that, maybe because that would likely mean he’d get booted out of the Speaker’s office by an enraged Tea Party, maybe because he figures Obama is going to break and agree to some concessions in order to get the government running again and avoid default. (Democrats could vote to repeal a tax on medical devices, for instance.)

If another week goes by without the shutdown being resolved and the debt ceiling being raised, the country is going to be risking some serious consequences for essentially no reason. To avoid that, Obama will have to give in at least a little to a group of politicians who will damage the world economy because they think the president of the United States is a Marxist. Or Boehner will have to commit political suicide and give the Democrats exactly what they want. Or the Tea Partiers in Congress will have to suddenly decide that their constituents are wrong and they should agree to let the government function. All of those possibilities seem unlikely, but the alternative—a world damaged because a few Americans refuse to get along—would be unthinkably stupid.