Posted by tin Posted on 10:09 PM with No comments 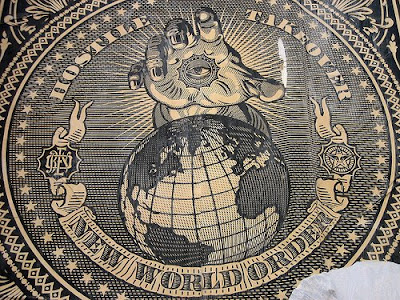 The new world order has been openly spoken about by politicians, globalists and business leaders for more than 20 years.
Barak Obama, Tony Blair, George Soros and George Bush Senior have all spoken on record that a new world order is coming.

What’s not well-known about the term new world order is that it has been used in Movies, TV Shows and in Video Games over the last 70 years.

" We bring the world’s new order. Heil Hitler’s New World Order. Everyone of foreign race Will love der Fuehrer’s face When we bring to the world dis-order"

Of the 15 new world order quotes, this one referenced from the movie Der Fuehrer’s Face is definitely the most unusual.

"So, you’re Naki, Saki, and Waki, eh? You’re all wacky! Grab them in ze name of ze New World Order! So you Rat-zis want the world! Well TAKE it!"

A classic short film from the three stooges where they are mistaken for Japanese soldiers. All attention in the 1940’s was focused on world war two, so paranoia about the emerging German and Japanese empires was reflected in this film.

"There’s a new world order coming, Shadow, and I’m going to be a king! A KING!"

This movie was set in the 1930’s in New York City and portrays the battles of good and evil against an arch nemesis who is building an atomic bomb.

"You wanted to know who I am, Zero Cool? Well, let me explain the New World Order. Governments and corporations need people like you and me. We are Samurai… the Keyboard Cowboys… and all those other people who have no idea what’s going on are the cattle… Moooo."

This movie perfectly reflects the current situation of the CopBlock founder who is facing 21 years jail on “wiretapping” charges for filming police.

The movie is based around a young boy who is arrested by the US Secret Service for writing a computer virus. Years later, he and his friends discover a plot to unleash a dangerous computer virus, but they must use their computer skills to find the evidence while being pursued by the Secret Service and the evil computer genius behind the virus.

"What you are about to witness, Ms. Lin, is not so much a missile attack, but the launch of a new world order. In precisely five minutes after your countrymen have attacked the British fleet, I shall retaliate for dear old England by sending this missile into Beijing, where General Chang has just called an emergency meeting of the Chinese High Command."

Tomorrow Never Dies is a James Bond movie that revolves around James Bond trying to stop a media mogul’s plan to induce war between China and the UK in order to obtain exclusive global media coverage.

Many argue that for the new world order to become a reality, the world’s mainstream media first needs to be centralized, making a global media outlet that would be a perfect propaganda tool for the implementation of world government.

"oK so i called you like you said. I mean it’s not my fault they got. I mean we held up our end. We’re still in? The whole new world order thing? Santa Fe, New Mexico. I know the drill, okay?"

I am number four is a movie about Aliens and their Guardians who are hiding on Earth from intergalactic bounty hunters.>>>>>Stargate SG-1 - Episode: Point of No Return (2000)

Stargate SG-1 was a military science fiction television series. I don’t understand how the script writers slipped the term new world order into this series. Could this be a sign of the next space race between China and Russia?

"You start saddling up camels in every country in the Middle East then you better be prepared to spend the next 50 years sifting through sand because this isn’t a quick run on the beach, Jed. This is the new world order"

The West Wing was a TV series about the lives of staffers in the west wing of the White House.

What a perfect setting to use the term ‘new world order’. The Globalists at their best!

"I had hoped the new world order would allow a chap to open his own correspondence."

Monarch of the Glen is loosely based on Sir Compton Mackenzie’s Highland Novels, which are set in the same location but in the 1930s and 1940s.

I wonder if the term new world order was used in the original Highland Novel? If it was, then that would be just creepy considering that they were written between 1941 and 1947.

"No I’m not. You two don’t have the juice anymore. Welcome to the new world order."

WTF? Anyone who watches Glee probably doesn’t have an interest in the new world order. So it’s interesting to see the script writers slip this one in.

"Mandy! I’m getting presents in the New World Order! Mrs. Claus said so! It’s you and me against the world."

The Grim & Evil Show was an American animated television series created by Maxwell Atoms. The series, which debuted on Cartoon Network, consisted of two segments which were eventually spun off into their own series.

"What will the New World Order bring for Yakov?"

The Ben Stiller Show specialized in parodies of movies and television shows and commercials. I think they probably just ripped this phrase off when portraying George Bush Senior from his momentous state of the union speech.

"Well the first thing you’ve gotta realize brother is that this right here is the future of wrestling. You can call this the New World Order of wrestling brother."


The Outsiders, Kevin Nash & Scott Hall, have invaded WCW (world championship wrestling)! They have promised a third member to their team to challenge the best WCW has to offer.

"Come, comrade-general. A new world order awaits. Yes. My father follows the ways of our ancestors and there is much wisdom in what he says"

Like the previous entries in the Red Alert series, the game is set in an alternate reality from World War II, in which the Western Allies fought the Soviet Union.>>>>>System Shock 2 (1999 Video Game)

"The process shall not take long. If it sounds unpleasant to you, put your mind at ease, insect. You will not survive to see my new world order. Don’t you like my new look?"

System Shock 2 is a 1999 first-person action role-playing video game, designed by Ken Levine for Microsoft Windows. The title is a sequel to the 1994 PC game System Shock, and was co-developed by Irrational Games and Looking Glass Studios.
Tweet