Posted by tin Posted on 11:13 PM with No comments 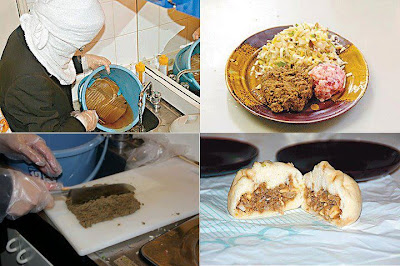 CARDBOARD SIOPAO SCANDALChinese street vendors soak cardboard in industrial chemicals to soften it. Then it is chopped and mixed with pork fat and flavored powder.
The mixture is stuffed in dough and steamed.CNN: http://www.youtube.com/watch?v=Lj9OGCcYTJM

In 2007, according to China Daily (A STATE-OWNED MEDIA), Beijing police have detained a television reporter for fabricating an investigative story about steamed buns stuffed with cardboard at a time when China's food safety is under intense international scrutiny.

Beijing authorities said investigations had found that an employee surnamed Zi had fabricated the report to garner "higher audience ratings."

In 2009. There was also a Melamine Milk Scandal in China. Around 53,000 Chinese children and infants have sickened by Melamine-tainted dairy products. 40,000 were treated as out-patients, 14,000 were Treated in various hospitals in China. And 4 infants have died because of this. Infusing the watered down milk with Melamine falsely increases the “protein” content of Milk, thereby fooling the Milk manufacturers.

China is also famous in Fake Chicken eggs scandal. People discovered fake chicken eggs being produced and sold in China. Fake egg’s shell is made of calcium carbonate. Egg yolk and egg white are made of sodium alginate, alum, gelatin, eatable calcium chloride and then add water and food coloring. First pour a set amount of sodium alginate into warm water and mix it into egg white like shape, then mix it with gelatin together with benzoic acid, alum and other chemicals to make the egg white. Egg yolk is just adding lemon yellow food coloring. Together with calcium chloride to form egg mixture into the mold to produce the egg membrane. Egg shell is made of paraffin wax, gypsum powder, calcium carbonate and other materials.
Article: http://www.chinahush.com/2009/04/24/how-to-identify-fake-chicken-eggs/

In 2010, Large amounts of rice noodles made with rotten grain and potentially carcinogenic additives are being sold in south China, state press said.

Up to 50 factories in south China's Dongguan city near Hong Kong are producing about 500,000 kilogrammes (1.1 million pounds) of tainted rice noodles a day using stale and mouldy grain, the Beijing Youth Daily said that time.

Last year (2011), according to the Korean-language “Weekly Hong Kong” (which many Vietnam websites are referencing as well), Singapore media claim that fake rice is being distributed in the Chinese town of Taiyuan, in Shaanxi province. This “rice” is a mix of potatoes, sweet potatoes, and plastic. It is formed by mixing the potatoes and sweet potatoes into the shape of rice grains, then adding industrial synthetic resins. Since the rice does not behave like normal rice, it stays hard even after it has been cooked. Such synthetic resins can also be very harmful if consumed.

A Chinese Restaurant Association official said that eating three bowls of this fake rice would be like eating one plastic bag. Due to the seriousness of the matter, he added that there they conducted an investigation of factories alleged to be producing the rice.
Article: http://www.weeklyhk.com/news.php?code&mode=view&num=10793

In the same year, A woman whopurchased a kilogram of pork from a wet market on Yang Gao North Road.

Another resident from Changsha city one after another discovered that the pork they had purchased from supermarkets emitted a blue glow at night. After this phenomenon was reported by the media, the Changsha Food Safety Commission mobilized the efforts of the business, livestock, industry and commerce, health, and other departments and at the same time invited experts and professors to participate in the investigation.

"What we're seeing across the country is a proliferation of knock-offs and copycats and outright counterfeit as the imported wine industry really explodes in this market," said Ian Ford of Summergate Fine Wines in Shanghai, adding that counterfeiters are taking advantage of inexperienced Chinese consumers.
Tweet