Conspiracy Truth vs the Media Gulag.

Posted by tin Posted on 4:23 PM with No comments 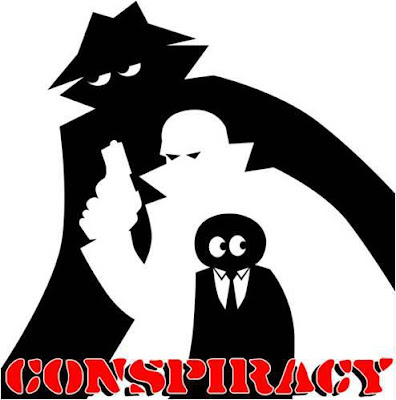 Ever felt trapped in your mind? Ever wonder why? This happens to countless people in the so-called “modern” media world we’re living in.

Here’s a really big subject we’re not “allowed” to talk about or consider. After all, we’re just “subjects”.

What about the idea of “conspiracy”? Think a dominating or controlling force would look kindly on any such “chatter” against it?

The Conspiracy Seed in Reality

Do people really think nothing is planned behind the scenes? Whether it’s business proposals, financial takeovers or outright political or military aggressions, people plan them…and of course in secret.

I’m so tired of this anti-conspiracy backwash. It kills intelligent investigation. Which of course it’s designed to do.

What these anti-conspiracy propagandists are really trying to reinforce is not whether elements conspire to bring about their own desired ends, but “Do you really think there are forces out to do you harm in your own government or national and economic structure?”

It’s all so obvious, yet you’re not allowed to draw logical conclusions.

Are We Living in a Spiritual Gulag?

This is a nasty time we’re living in. This type of propaganda is really a form of gang bullying. “Don’t even consider this conspiratorial idea or you’re an abject jerk and questioning everything you’ve ever learned. How can you? You’ll lose all you’ve got. Your friends and family will disown you..”..blah blah…

The shrill arrogant disdain in their tone goes on to imply, “Get on board with the program and be smart. Otherwise, ultimately you’re one of them.”

So in reality, their own deservedly paranoid perspective is protecting their own asses by attacking you for questioning them. But you’re not supposed to see that obvious truth.

After all, you’re in the matrix of the mental and spiritual gulag.

Divide, Demean and Conquer Through Drama and Repeated, Ridiculing Rhetoric

–Fear and Acceptance: People want to be accepted most of all. The barrage of fear mongering of every sort, from terrorists to food scarcity to job loss and financial collapse….takes its toll.

–Safety and security: And who’s the big brother provider? You guessed it…the same ones who say it’s the nutballs screaming conspiracy and “Don’t listen to them. In fact, we think they’re terrorists too. So watch your step.”

–Path of Least Resistance: People are so tired, dumbed-down and drugged by tainted food, air, water and food they just want to get by. Sad, but true.