Home » Paranormal , Religion » Don Bosco's experiences with the Paranormal and the Demonic

Don Bosco's experiences with the Paranormal and the Demonic

Posted by tin Posted on 9:53 PM with No comments 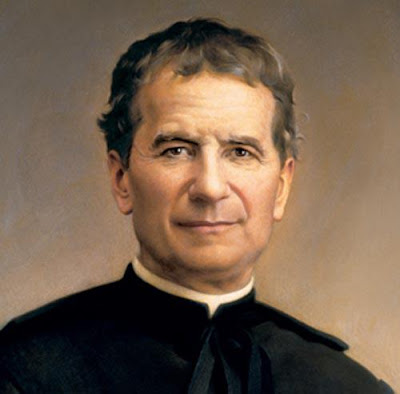 The young energetic priest was a hard worker in the Lord’s vineyard and because of this, he experienced a lot of demonic harassments.
The simple and frugal rectory where he was staying was truly what one would call a “haunted house.” When the sun went down and all was dark and quiet, unexplained phenomena would start to occur.

As the priest would prepare to go to sleep after a hard day’s work, without any warning loud bangings would suddenly reverberate in the room above his. He already knew that there was no scientific explanation for the sources of these deafening noises. There was no one living above his room, for this was the attic and he had checked and rechecked the source of these bangings but could find none. Bang! Bang! Bang! It seemed to him that huge stones were being thrust on the floor above him. Consistent searching for the source of these noises was futile. The young hardy priest could not stand the nightly raucous noises any longer, he chose then to change his sleeping quarters. It was useless; these unearthly noises followed him even to his new room. The unearthly sounds continued above his new room. Little did the priest know that these harassments were only the beginning of a long string of paranormal phenomena that would unnerve even the most courageous person.

As the young priest was getting used to these continuous rackets above his room, a new kind of assault started to begin; the moment he would turn out the lights and would lie on his bed to go to sleep, he would then be physically attacked by unseen forces. Once he said that, “I was tormented by a hideous beast, something like a bear that tried to smother me in bed.” It truly was demonic in nature since the devil usually attacks through smothering or strangling persons during the night. This is one of Satan’s tactics to sap the energy of those consecrated to and serving God. The next day, the young priest would be left exhausted although he continued to fulfil his duties faithfully. But the smothering attacks were just one of the preternatural harassments the priest started experiencing. He narrates, “No sooner do I fall asleep than a booming voice shouts into my ear and drives me out of my mind.” In addition, when he would be at the point of falling asleep, his pillow would start shaking and even his entire bed would join in the shaking. The demon was truly angry at this priest.

Once the entire bed was lifted off the floor and he tells us, “The devil lifted my bed aloft and let it drop to the floor.” The preternatural attacks also assaulted his sense of hearing; he would hear at night horrifying sounds like blood-curdling screams; and they occurred right inside his room. What was also extraordinary was that there would suddenly materialize inside his room strong gusts of wind that would blow around his room and scatter all his books and papers. This really was a very intense demonic harassment. The priest also witnessed other truly terrifying events such as seeing a table inside his room levitating while at the same time rocking back and forth.

Seeking continual assistance from his companion priests in the rectory proved of no avail; no one wanted to sleep with him in his room since they themselves experienced similar horrifying paranormal harassments when they tried accompanying him at night. What was most horrifying was when this young priest would visually see his demonic attackers. Once he saw his wooden door burst open and a hideous monster with jaws wide open charged him in order to devour him. That was enough to make a person die of fright. Sometimes the demonic entities would appear as various animals such as a tiger, a wolf, or a monster serpent. They would hover around his room and even leap on him while he was on his bed. But making the sign of the cross always protected him.

With all these experiences that occurred in the dead of night and alone, he was once asked whether he was afraid. Yet with all his harrowing experiences; this was his surprising answer, “Just as I have no fear of angels because, as I hope, I am a friend of God, likewise I do not fear demons because I am an enemy of God’s enemies. He will protect me. Satan can do whatever he pleases now, because this is his moment, but mine will come too!” This courageous priest was an exorcist and a staunch defender of the Church against occult practitioners such as spiritists and mediums. That's why the devil hated him in the first place, and wanted to attack him to make revenge. He frequently challenged the powers of these occult practitioners and always triumphed over t hem through the power of God. It was like Elias confronting again the 400 priests of Baal.

As an exorcist, this priest could sometimes see demons on the backs of those in mortal sin. Once, a 35-year-old woman was brought to him. Even before he arrived, the possessed woman knew that he was arriving and when he tried to trace the sign of the cross with a picture of the Virgin Mary on the forehead of the possessed, the woman became violent and wild. She was so strong and no one could hold her down and she writhed like a serpent. The exorcist made a prophecy by stating that she would be set free on the Feast of the Immaculate Conception which in fact occurred.

He continued his parochial ministry faithfully even though he was continually tested by demonic forces. His deep faith, heroic courage, and faithfulness came from the fact that he was a living saint. We all know him today as Don Bosco. He mentioned an important fact: what always saved him from these assaults of Satan was his deep devotion to the Blessed Virgin Mary. As an aside, the sounds that disturbed him in the attic ceased when he placed a small picture of the Virgin Mary there and asked for her assistance. Don Bosco was a visible witness to the constant warfare between God and Satan in the spiritual realm.
Tweet