GOAT OF MENDES OR BAPHOMET

Posted by tin Posted on 6:11 PM with No comments 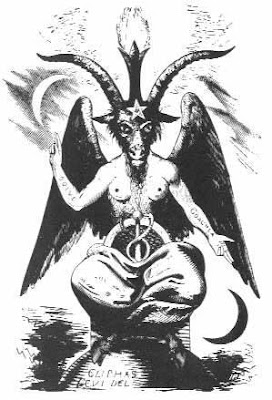 Baphomet, from medieval Latin Baphometh, baffometi, Occitan Bafometz) is an imagined pagan deity (i.e., a product of Christian folklore concerning pagans),
revived in the 19th century as a figure of occultism and Satanism.

Often mistaken for Satan, it represents the duality of male and female, as well as Heaven and Hell or night and day signified by the raising of one arm and the downward gesture of the other. It can be taken in fact, to represent any of the major harmonious dichotomies of the cosmos.

If you look at the picture.....The original has one side masculine and one side female (although modern artists have made the breasts equal thinking that he just was a crappy artist). A picture of a goats head (animal) on a human morph upper torso with fish scales on the solar plexus (fish) and wings (bird). It's arms give the Hermetic Axiom "As it is above...so shall it be below" (one pointing up and one down). In latin one arm says Solvent (moving) the other Coagula (non movement). Above is the light moon (day). Below the dark moon (night). It sits on a square that sits on a circle.

It first appeared in 11th and 12th century Latin and Provençal as a corruption of "Mahomet", the Latinisation of "Muhammad" but later it appeared as a term for a pagan idol in trial transcripts of the Inquisition of the Knights Templar in the early 14th century. The name first came into popular English-speaking consciousness in the 19th century, with debate and speculation on the reasons for the suppression of the Templars.Since 1855, the name Baphomet has been associated with a "Sabbatic Goat" image drawn by Eliphas Lévi.
Tweet