NAZI GOLD AND THE VATICAN CONTROVERSY DID GREED AND GOD WORK HAND IN HAND?

Posted by tin Posted on 6:19 PM with No comments 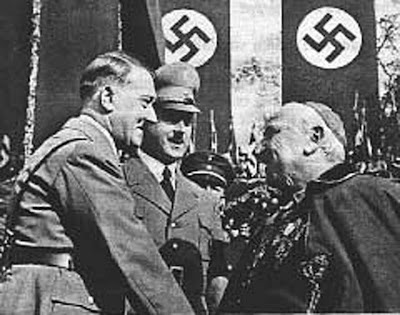 Wealth plundered by the Nazis from their victims has been traced to banks in Switzerland, Sweden, Portugal and other neutral countries that were secretly helping the Nazis stash stolen gold or launder it to buy war materiel.
One state after another has reluctantly opened its archives and banking records to aid the search, with one glaring exception: the Vatican.

So far the Vatican has flatly refused to allow investigators access to its archives, despite repeated pleas from several nations and from Jewish groups. A task force headed by the US Undersecretary of State Stuart Eizenstat that time issued a report that questions the Vatican's wartime financial dealings. And mounting evidence suggests that plunder from the Ustasha, Croatia's pro-Nazi fascist government during the war, with the aid of Croatian Catholic priests, made its way to Rome. Some of it was used to help Croatian war criminals flee to South America.From 1941 to 1945, the Ustashas exterminated an estimated 500,000 Serbs, Jews and Gypsies, and looted their property. They demanded 1,000 kilograms of gold from the Jews of Zagreb, only to ship them to concentration camps and kill them anyway. The Croatian Catholic Church was closely entangled with the Ustashas: in the early years of the war, Catholic priests oversaw forced conversion of Orthodox Serbs while Franciscans distributed propaganda.Several high Catholic officials in Yugoslavia were later indicted for war crimes. They included Fr. Dragutin Kamber, who ordered the killing of nearly 300 Orthodox Serbs, the "hangman of the Serbs" Bishop Ivan Saric of Sarajevo, and Bishop Gregory Rozman of Slovenia, a wanted Nazi collaborator. A trial in 1946 resulted in the conviction of a half-dozen Ustasha priests, including former Franciscan Miroslav Filipovic-Majstorovic, a commandant of a concentration camp where the Ustashas tortured and slaughtered hundreds of thousands with a brutality that shocked even the Nazis.As more secret documents become public, it is Fr. Krunoslav Draganovic, who emerges as the most significant player of all. The Franciscan had been a senior official of the Ustasha committee that handled the forced conversion of the Serbs. In 1943, the Ustasha arranged with the Church for Draganovic to be sent to Rome. There he served at a seminary of Croatian monks that was in fact a center of clandestine Ustasha activity. He also became the Ustasha's unofficial emissary at the Vatican and liaison to the Vatican organization to aid war refugees. Draganovic and collaborators such as Fr. Golik provided the means and support, including forged Red Cross passports, for a number of Ustasha war criminals to escape justice. Through an underground railroad of sympathetic priests known as "the ratline", the Ustashas were able to escape to neutral countries, primarily Argentina. Virtually the entire Ustasha leadership went free.
The day that Germany capitulated 288 kilograms of gold were removed from the Croatian National Bank and state treasury. Some of that landed in Draganovic's hands. Called the "Golden Priest", he doled it out to Croatian refugees, including Ustasha soldiers. He was never charged and returned to Yugoslavia, where he died in 1983.A memo that surfaced last summer prompted the State Department's interest, but the Vatican swiftly dismissed it, saying the charges could not be true. Other reports mention Ustashas meeting Vatican officials, living in the Vatican; even being hidden at the pope's summer retreat at Castel Gandolfo and driving cars with Vatican plates in Rome.The Vatican's tolerance of the Ustasha during the war was no secret, but though they insist they have nothing to hide, they refuse outside researchers free access to their archives because the collection contains sensitive personnel files. As a general rule, the Vatican says it releases church documents only after about 75 years, but outside observers contend it is much rarer than that.Siroki Brijeg, Bosnia-Herzegovina — Near the site of a World War II wartime massacre of Serb women and children by Croatian Nazis stands a Franciscan Monastery. It's just down the road from Medjugorje or "Miracle City" where the Virgin Mary is said to put in nightly appearances for the tens of thousands of Roman Catholic pilgrims who flock there each year. The Franciscan Monastery at Sirkoi Brijeg and its controversial contents are at the center of an international scandal involving the Franciscans, Croatian ultra nationalists and the Vatican Bank.A lawsuit, Alperin v. Vatican Bank, filed in San Francisco Federal Court in November 1999 by Serb, Jewish, and Ukrainian Holocaust survivors against the Vatican Bank and Franciscans seeks return of Nazi loot stolen from wartime Yugoslavia. According to a 1998 US State Department report, the money known as the Ustasha Treasury, is thought to have been concealed in the Vatican and used in part to fund the escape of Nazi and Croatian war criminals to South America. The Franciscans acted as facilitators and middlemen in moving the contents of the Ustasha Treasury from Croatia to Austria, Italy and finally South America.The Franciscans have denied their wartime ties to the Ustasha regime in Croatia, which slaughtered over 700,000 Serbs, Jews, and Gypsies and set the stage for today's ethnic battles in the Balkans. However, in Siroki Brijeg, plaintiffs' attorneys have obtained tangible proof of the Nazi Franciscan connection. Cameramen working for Phillip Kronzer, a staunch foe of Medjugorje and its Marian apparitions obtained entry to the Monastery and filmed a secret shrine honoring the Ustashe. A plaque dedicated to Franciscan monks who were Ustasha members was filmed along with a massive shrine lining the walls complete with photographs of Ustasha soldiers some in Nazi uniforms. The admonition, "Recognize us, We are yours" can clearly be discerned in the video footage. On a later visit to the monastery the shrine had been dismantled but the videotape preserved the evidence and has now been made available by the Kronzer Foundation.Just as in World War II, Medjugorje in the 1990's was the site of brutal ethnic cleansing by Croat nationalists. Alperin plaintiffs have alleged that Medjugorje and its facilities are connected with the Ustasha Treasury and the monastery at Siroki Brijeg seems to provide hard evidence of the connection.
Tweet