Posted by tin Posted on 9:51 PM with No comments 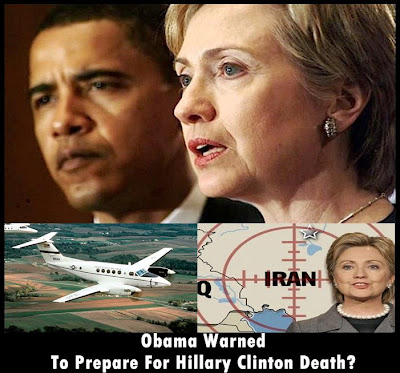 startling Foreign Military Intelligence (GRU) report circulating in the Kremlin states that President Obama was informed by White House medical personal shortly after Hillary Clinton’s return to the United States that her health prognosis was “grim” as her likelihood of survival was “diminishing by the hour.”

Clinton was severely injured over a fortnight ago when her US military C-12 Huron aircraft crash landed at Iran’s Ahwaz International Airport during a US secret mission to that Persian Gulf nation where she was reported to be “unconscious” and “bleeding profusely.”

US mainstream propaganda news sources have, so far, denied the truth of this incident and as late as 28 December were reporting that Secretary Clinton would be returning to work this past week after her having suffered a bout of the flu and a concussion.

Within hours of the GRU releasing their information on the Iranian air crash of the US military C-12 Huron, however, these same American media propaganda news sources began reporting that Secretary Clinton was hospitalized for what they described as a blood clot on her brain near her skull.

Further confirmation of true facts relating to Secretary Clinton were, also, released by the Israeli MOSSAD linked news site DEBKA, who in their 31 December article titled, Hillary Clinton In Hospital Amid Speculation Of Plane Accident In Iran, wrote:

“…around Tehran and the Gulf Emirates, debkafile was already picking up insistent rumors claiming that Clinton was seriously injured while on a secret mission in the region in the first week of December. Some claimed that in the same incident, Americans in her party – advisers and security personnel – were either injured or killed. Those rumors did not say what her secret mission was. However, the episode described occurred shortly after Dec. 1, when, as debkafile reported at the time, Obama administration officials and senior representatives of Ayatollah Ali Khamenei launched secret talks on Iran’s nuclear program.”

Curious to note, GRU analysts say in this report, is that Obama has not acknowledged to the American people the grave nature of Secretary Clinton’s condition, despite his appearing before the American propaganda press establishment at least three times since these events occurred.

Obama’s failure to acknowledge Secretary Clinton’s grave health situation was brought into stark relieve the other day when her daughter, Chelsea, was spotted leaving the hospital where her mother is being cared for and described as “visibly anguished”.

Russian medical experts quoted in this GRU report state that Secretary Clinton has “more than likely” suffered what they call a Traumatic Brain Injury (TBI) as a result of the plane crash and that they say is the “only reasonable explanation” for a blood clot appearing in the location between the skull and the brain.

Interesting to note is that Obama has already selected Secretary Clinton’s replacement, and who is reported to be the present US Senator to Massachusetts, John Kerry.

Critical to note, Russian medical experts further state in this report, is that the timeline from when Secretary Clinton was first severely injured, to when the news of her true condition was first released, suggest a “planned effort” on the part of the Obama regime to manage the true facts surrounding her health, and here eventual death, or recovery.

To if Secretary Clinton is able to fully recover, the GRU says, is “within the realm of possibility” as modern medical advances treating TBI’s has advanced significantly, and no better care for such head injuries exists in the world outside of the US military medical establishment who have treated hundreds of thousands of similar cases over that nations over decade of war.

What remains unknown, and which this report does not speculate upon, is to why the American people are still not allowed to know why Secretary Clinton was sent to Iran to begin with, and why the true state of her health is still being kept secret?