RUSSIA READY TO PRE-EMPTIVE STRIKE ON MISSILE SHIELD IN EUROPE

Posted by tin Posted on 6:36 PM with No comments 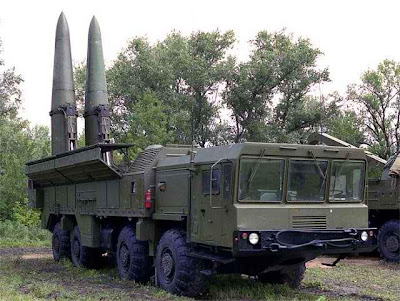 Russia is ready for a pre-emptive strike on European missile defense systems if the US refuses dialogue, stated Russia’s Chief of General Staff Nikolay Makarov at the Moscow ABM conference.

“Considering the destabilizing nature of the [American] ABM system, namely the creation of an illusion of inflicting a disarming [nuclear] strike with impunity, a decision on pre-emptive deployment of assault weapons could be taken when the situation gets harder,” Gen. Makarov told the audience.

The NATO delegation present at the conference rushed to disagree with the Russian general, saying that the ABM system would never target Russia.

NATO Deputy Secretary-General Alexander Wershbow said that Russia’s arguments do not convince him.

Among other measures, Russia already promised to deploy short-range Iskander missiles in the Kaliningrad Region if NATO fails to reach agreement with it on missile defense.

Russia has concerns that the ultimate aim of America’s global ABM shield in the works is the gradual depreciation of Russia’s nuclear arsenal. Moscow says no country possesses any militarily significant quantity of nukes to pose a vital nuclear threat to the US other than Russia.

Moscow's proposition to develop a joint European missile defense system has been turned down.

Also, the Obama administration refused to give cast-iron guarantees that the new ABM is not going to be deployed against Russia.

The Russian Defense Ministry has organized a representational international conference called “Missile Defense Factor in Establishing New Security Environment” on May 3-4 in Moscow to correlate positions of many interested states on the burning issue of missile defense.

Over 200 experts from military departments of 50 countries, including 28 NATO states, have gathered in the Russian capital to share opinions.

Opening the conference, Russian Defense Minister Anatoly Serdyukov stated that so far no mutually-acceptable solution to the issue of ABM has been found.

“The situation is practically heading towards a dead end,” acknowledged Servdyukov.

At the same time, the Russian president sent an address to the conference, sharing hope that a solution can be found.

“I believe we can find a formula which could help us avoid the division into those who win and those who lose,” President Medvedev insists.

The conference consists of several working groups. Russia’s Ministry of Defense is going to present a computer model of how the American ABM in Europe is going to influence Russia’s forces of nuclear containment.

As a goodwill gesture, Russia wants to make an excursion for the delegates to the heart of Moscow’s A-135 ABM system near the Russian capital.

No official documents are going to be signed as a result of the ABM conference in Moscow.
Tweet