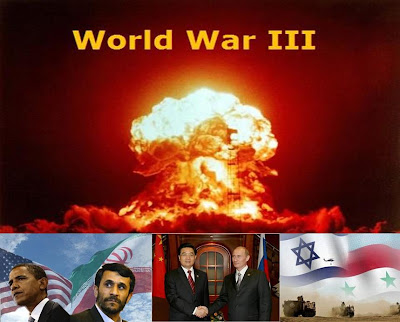 Russian and Chinese military forces are being placed on their ‘highest alert’ in anticipation of a massive land invasion believed being planned by the United States of both the Middle East and Central Asia.
The plans for this “Total Global War” the Americans are preparing to launch were first revealed to China’s Ministry of State Security (MSS) by the former Blackwater mercenary Bryan Underwood who is currently being held by US authorities for spying and which we reported on in our 4 October report titled “China Warns Russia Of Coming American “Great Event.”

Within hours of Putin’s reading of the coming US plans for Total Global War, this report says, he wrote a rare article in the Izvestia daily outlining a grand project to integrate post-Soviet states into closer cooperation, scheduled an emergency trip to China to meet with Hu, and ordered the FSB to notify China’s MSS of the arrest and detention of their spy Tun Sheniyun who was captured last year for attempting to steal sensitive information on Russia’s most powerful anti-aircraft system.

The “New Great Game” moves being planned by the Americans that is striking fear into both Russia and China includes:

1.) The deliberate implosion of both the US and EU economies in order to destroy the Global Financial System that has been in place since the ending of World War II

2.) The launching of a massive conventional war by the US and EU on the North American, African and Asian Continents to include the Middle East

3.) During this all-out war the deliberate releasing of bio-warfare agents meant to kill off millions, if not billions, of innocent civilians

4.) At the height of this war the US and its allies will sue for peace and call for a new global order to be established in order to prevent the total destruction of our planet.

an unidentified source within the US Department of Defense (DOD) further warned that the Obama regime was preparing for a massive “tank-on-tank” war and that US military forces are “expecting something conventional, and big, coming down the pipe relatively soon.”

To how close this war may be the FSB in their report states that it will be “much sooner than later” as the Americans have pre-positioned in Iraq nearly 2,000 of their M1 Abrams main battle tanks, have pre-positioned another 2,000 of them in Afghanistan, and between the Middle East and Asia have, likewise, put into these war theaters tens-of-thousands of other typed armored vehicles.

The “final piece” for the activation of this massive armored force, standing poised like a dagger at the heart of both Asia and the Middle East, the FSB says, is the call for a “Full Mobilization” of over 1.5 million American reserve forces which can occur at “at a moments notice” as the US is currently at war and needs no further authorization from its Congress to expand their areas of operation.

Important to note about the American plan for global domination through massive warfare is that it is not really a secret, and as (curiously) revealed on the tenth anniversary of the 11 September attacks upon the United States when the US National Security Archive released a memo written by former US Defense Secretary Donald Rumsfeld in September 2001 wherein he warned “If the war does not significantly change the world’s political map, the US will not achieve its aim.”

To what the “aim” of the United States is as their war against the world has now entered its 10th year, the FSB says, is to prevent “at all costs” the implosion of the US Dollar as the main reserve currency of the present global economic system before the West’s envisioned “New World Order” can be established.

The first threat to the Americans “master plan” for global hegemony came in November 2000 when the former Iraqi leader Saddam Hussein quit accepting US Dollars for oil and, instead, stated his country would only accept Euros. In less than 10 months the US was attacked and used that as an excuse to topple Hussein and reestablish the US Dollar as the world’s main reserve currency.

Interesting to note is the failure of Libya’s former leader Gaddafi’s plan to introduce the gold dinar, a single African currency that would serve as an alternative to the US Dollar and allow African nations to share the wealth, but which like Iraq’s Hussein “plan” brought a swift and brutal invasion by the Americans and their Western allies to keep it from happening.

The only nation that has successfully abandoned the US Dollar is Iran, who since February 2009 abandoned all American currency opting instead to value their oil and gas in Euros. Iran, however, and unlike oil rich Iraq and Libya, has not been attacked due to the Iranians having acquired from Ukraine between 6-10 nuclear armed X-55 missiles (range of 3,000km [2,000 miles]) in 2005. [Note: Former Ukraine President Viktor Yushchenko stated that the missiles sold to Iran did not contain their nuclear tips, a statement disputed by the FSB who states they were armed and “ready to fire.”]

This FSB report further states that both Putin and Hu were “enraged” by the deception of the West in regards to Libya, who after being given “absolute assurances” by the Obama regime that they weren’t planning an invasion, broke their word and did it anyway.

Russian and China, in turn, stopped the West’s plan for another war last year by their vetoing the US-backed plan in the United Nations Security Council to turn Syria into another Libya. So angry did the Americans become that their furious UN envoy Susan Rice stormed out of the meeting after the West didn’t get what it wanted.

Even worse for the West’s war plan against Syria was its President warning this week that if his nation was attacked by NATO he would cause to be fired hundreds of missiles into Israel’s most populated city of Tel Aviv within six hours, which would, of course, bring about a catastrophic nuclear response.

And in a preemptory move to counter the planned American blitzkrieg into Central Asia and Pakistan from Afghanistan, Indian Army Chief General VK Singh warned that thousands of Chinese military forces have now moved into Pakistan-occupied-Kashmir joining an estimated 11,000 more of them believed to have entered that region in the past year.

To the coming deliberate implosion by the US of the global economy, the FSB further says in their report, it now appears “certain” after a new report emerged this past from Philippa Malmgren, a former economics adviser to President George W. Bush, stating that Germany was preparing to abandon the Euro and has ordered the printing of Deutsche Marks to replace it.

Most frightening of everything in this FSB report, however, is the reply Putin gave to Russia’s top generals when asked what preparations should be made and he answered…. “Prepare for Armageddon.”
Tweet