Posted by tin Posted on 5:38 PM with No comments 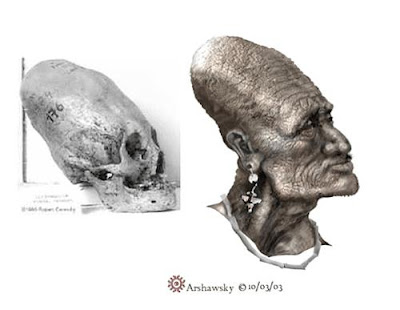 True coneheads have various features that set them apart from human skulls:• They always maintain their natural convolutions which indicate no deliberate shaping techniques were used.

• They have two small holes in the back of the skull (holes that are not present on normal human skulls) which indicates, vessels circulate blood to that area of the brain (in the same way a human jaw has two small holes on either side for nerves and blood vessels to feed the tissue).

• A human skull is composed of 3 cranial plates; the frontal plate ends at the upper part of the forehead; the 2 parietal plates which lie behind this, intersect the frontal plate making a “T” shape . The coneheads have only two plates whilst the eye sockets are larger and they have fewer teeth.

These natural elongated skulls also show other physiological differences indicating they come from a sub-species of homo sapien or, a different species entirely. So, was this a sub-species of humanity? Foetuses and infant coneheads have also been discovered which again implies the elongation feature was hereditary. Before any fanciful speculation takes place, we would need to analyse the DNA but as expected, conventional archaeologists and scientists haven’t been prepared to get involved with this project.
Tweet