Home » Mystery » The Count of Saint Germain - The man who knows everything and never dies!

The Count of Saint Germain - The man who knows everything and never dies!

Posted by tin Posted on 9:45 PM with 2 comments 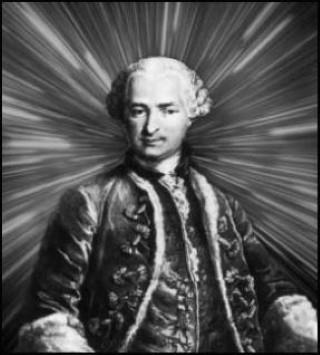 Who was the Count of Saint Germain? Is he immortal or even a time traveler? Apart from him, probably nobody even knows it.
The fact is, however, that he often astonished his listeners when he described inventions, which were still unkown in the 18th Century - the railroad and the steamboat. How did he know it?
The Count of Saint Germain is designated as a famous adventurer of the 18th century, who was known throughout Europe as "the miracle man". Nothing definite is known of his parentage, and his death is shrouded in darkness. Voltaire, a cynic who was not easily impressed, characterized him – face to face with Frederick the Great – as "the man who knows everything and never dies!"

According to witnesses, he had lived for at least two hundred years, while hardly changed his appearance.

The count turned up suddenly from nowhere. All his life he was surrounded by intrigue and rumours of magical powers. He should have had more than eighty pseudonyms, and also the name of Saint Germain was probably not his real one.

He first appeared in 1710, which was testified by the composer Jean-Philip Rameau and the young Countess of Geordie, whom described him as a forty to forty-five year old man. As for the next two decades, almost nothing is known except that he was a close confidant of Madame de Pompadour and had a great influence in Freemason lodges and other secret societies of that time.

Between 1737 and 1742, Saint Germain stayed at the court of the Shah of Persia, where he acquired probably a part of his vast knowledge about diamonds. In 1743, he appeared at the court of King Louis XV. and was famous for his great wealth and his alchemical skills. He himself claimed to have found the philosopher's stone and produce diamonds, as well as having traveled to the Himalayas and had found the people who "know everything". In addition, he added that "one must have studied in the Pyramids, as I have done it" to trace his secret. He also said that he had traveled through space. "A very long time I flew through space. I saw globes, the world revolved around me and at my feet.” On another occasion he said:" I traveled through time and found myself unconsciously in distant countries. "

The count was assessed a visionary - he told of inventions from the future. It is further claimed that he could make himself invisible in front of witnesses and appeared suddenly whenever and wherever he wanted.

In 1744, the count was jailed for espionage in England but was released after interrogation. 1745 and 1746 he lived at the Viennese court like a prince and was "witty and highly gifted." He was not only described as being very rich, but spoke in addition to several European and Arab, Oriental and classical languages, and was an excellent violin and piano player. Moreover, he was a vegetarian and only drank wine occasionally.

Between 1747 and 1760 he attained the height of his fame at the court of Louis XV., in front of whom he enlarged or increased diamonds. There they gave him a laboratory for his alchemical experiments. The Countess of Geordie - then at the age of seventy years – was very surprised that Saint Germain still looked like when they met fifty years ago.

From 1762 to about 1773 in all Europe reports were published on his scientific and political career: "An extraordinary man, who could turn iron into a metal that for the work of the goldsmith's at least is as good and beautiful as gold."

In Venice, he had a factory with one hundred workers. The company was engaged in the manufacture of linen which looked like silk.

Between 1774 and 1784, after the death of Louis XV., he warned Louis XVI. and Marie Antoinette in vain of a "giant conspiracy" on which he had become aware by his insight into Freemasonry and Illuminati circles.

After that, he mostly lived in Germany. There, he was said to have committed with his pupil and patron, Prince Charles of Hesse-Kassel, in Freemasonry, Rosicrucians and Knights Templar circles.

At the court of Charles of Hesse-Kassel, the count admitted for the first time to grow old. On 27 February 1784 he allegedly should have died suddenly in the arms of two maids, whereby the funeral is said to have taken place on 02 March 1784, which is also registered as such in the church registers of Eckernförde. When, however, days later, his coffin was opened again, it was empty!

Then followed his appearance – confirmed by many witnesses - at a large gathering of occultists on 15 February 1785 in Wilhelmsbad - including Freemasons, Illuminati and necromancers, at which the different views of the lodges should have to be clarified. He appeared there in company with the famous Italian adventurer and alchemist Cagliostro, the Viennese physician Franz Mesmer, who also is the founder of the "animalistic healing magnetism" (Mesmerism) and the French writer and philosopher Louis Claude Saint Martin.

In 1788, he lived mostly in France again and warned the nobles of the impending revolution. But again he was not taken seriously. In 1789, he then traveled to Sweden to King Gustav III. to protect him against a possible disease.

He seemed to have taught the people with whom he associated about the inner meaning of life, and - because he foresaw the impending revolution - have consoled them with the prospect of the subtle world - the afterlife.

To Marie Antoinette he predicted the day and the hour of her death in 1793. The queen herself has testified that the Count appeared with his soul's body (astral body) in her cell and erected her soul by giving her the certainty of the glorious life in the other world, which gave her the noble dignity when mounting the guillotine.
Tweet