Home » Illuminati » The Occult Nature of the Olympics Closing Ceremony

The Occult Nature of the Olympics Closing Ceremony 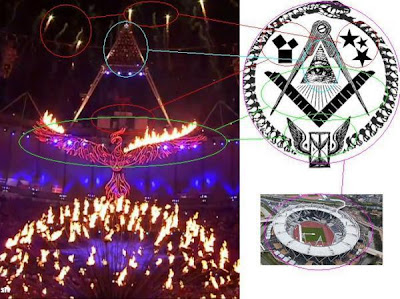 The Alchemy of the Closing Ceremony

It was an amazing show ~ as you would expect from something designed to fully engage the audience ~ and there were some brilliant performances (my favourites were Russell Brand as The Egg Man and Annie Lennox ).
It was wonderful to see people having such a great time, especially the athletes and volunteers who deserved a great party after all their hard work.

However, underlying the show and the party, and unbeknown to most of those taking part, it was a Freemasonic closing ritual.

At the beginning, the struts of the London Eye which provided the backdrop for most of the activities of the first hour were set in the position of the saltire cross of the Scottish Rite of Freemasons. I’ve written extensively elsewhere about the deeper meaning and history of the saltire cross, but in a nutshell for now, it is about death and resurrection.

One of the highights featured a stepped pyramid created out of 303 white boxes to Kate Bush’s Running Up That Hill, and when the song got to, "If I could make a deal with God" all the dancers were in full prostration on the floor.

In numerology, the O counts for zero, so in other words, the white boxes making up the pyramid represented the number 33, the most significant number for any Freemasonic ritual and the highest order that can be achieved.

The main numbers being used in the closing ceremony were 4, 7 and 27 ~ again all highly significant Freemason numbers (for instance, 40 members of Stomp, 400 lbs gold went into making all the gold medals, 270 singing schoolchidren, 70,000 volunteers etc.)

The classic masonic black-and-white chequered floor was flashed up, dozens of times, on the screen behind one of the performing bands, as a background to an Olympic medal in the foreground.

And then, at the end, the ultimate Freemasonic symbol of all, the phoenix rising from the ashes, to the sung words of "...we can rule the world" by Take That and the backdrop turning into the image of the famous masonic compasses and ruler.