U.S. and Soviet captured a large collection of German Secrets.

Posted by tin Posted on 8:32 PM with No comments 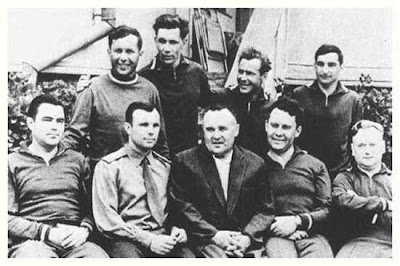 In each country, a select group of individuals were chosen as the first astronauts. In most cases, these people were kept secret from the public. A good example is the Russian born astronaut Grigori Nelyubov. Little is known about Nelyubov, but he was likely the third or fourth person to travel into space before his dismissal from the Soviet space program in April, 1963, for disorderly conduct. Following his dismissal, all information regarding Nelyubov’s life was stricken from the Soviet record.

Grigori Nelyubov’s image was removed from a collection of famous photographs, including the Sochi Six picture, which shows the top members of the original class of Soviet cosmonauts. This airbrushing has led to a large collection of conspiracy theories regarding lost cosmonauts and unreported space flight. In 1966, Nelyubov committed suicide. From 1961 to 1972, at least eight former Russian cosmonauts are known to have died. The Sochi Six picture was officially released in the 1970s and the deception was only discovered after Russian news managers lost track of which versions of the picture they had already published. The fakery has caused some to label the Soviet Union’s string of space triumphs over the United States in the 1950s and early 1960s as a series of falsifications. I have included the original Sochi Six photograph before Nelyubov was removed. He is the tallest man in the picture.
Tweet