Home » news » ‘US created the monster of China’

‘US created the monster of China’

Posted by tin Posted on 4:14 PM with No comments 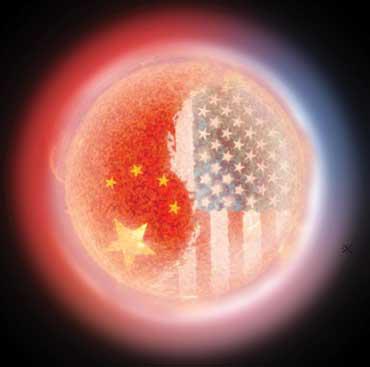 As America battles a crippled economy and high unemployment, its superpower status seems to be ever more fragile.
Meanwhile, China’s economy and military continue to grow at an amazing rate – and some US politicians say America is to blame.

“We have built China into a major economic power without demanding any kind of political reform … we have created a monster,” Congressman Dana Rohrabacher (R-CA) told RT.

Rohrabacher was a senior speech writer for the Reagan administration. He played a leading role in the formulation of the Reagan Doctrine, which centered on giving aid to insurgent and paramilitary groups and propping up dictators in order to oppose the Soviet Union's global influence.

RT: I know you’ve been a staunch critic of how the US relationship with China has evolved. How would you rate that relationship today?

Dana Rohrabacher: We are getting our just reward for a stupid policy. We have built China into a major economic power without demanding any type of political reform. We’ve permitted them to steal our technology; they get away with murder – quite literally – when it comes to dissidents. We have created a monster. What was a very weak country before – we have permitted them to build into a massive economic power with, of course, our industrial leaders making a profit by their doing that.

RT: Along those lines, China was only one of a handful of countries exempt from US sanctions targeting countries that import crude oil from Iran. Why is that?

DR: There’s a horrible double standard that we have. We have heaped on Russia all types of requirements and restrictions and mandates if they’re going to get anything, even the repeal of Jackson-Vanik, which should have been done 20 years ago. While China has had no liberalization at all, Russia’s had enormous liberalization. Their churches are full, you have opposition groups and papers in Russia. You have nothing like that in China whatsoever.

RT: Let’s be honest – China in many cases has taken up the debt of the US and has come to lend a helping hand when the US needed it…

DR: Let's also be fair, we bent over backwards for these people before we had our debt, we are the ones who made them an economic power so that they can loan back to the United States, so there is a certain number of big businessmen who have profited greatly in the China trade. Workers have lost out greatly because the jobs they should have in manufacturing have gone over to China and the technology has gone over for free.

RT: Who specifically has benefited?

DR: Well, you’ve got some very big businesses and established manufacturing outlets in China, and they do so thinking they will go from a 10% to a 20% profit, but in the long run the people who own the stock lose out because the Chinese confiscate some of the properties over there. Our own working people lose out because they lose manufacturing, and then maybe the CEO puts a couple of million dollars in his pocket then in a year or two fades away even though the result has been catastrophic for the company.

RT: What is your concern if these policies continue? Are you worried they could have a negative impact on the US?

DR: I think there’s a negative impact on the whole world, to have the world’s worst human rights abuser – which China is – to have enormous economic power and thus transfer that to military power. I think you will find China is already much more aggressive than it was 20 years ago, and I think you will find, Russia will find for example, that China will start making claims again for land that was taken from it in the time of the Tsars. This is a regime that’s made frightening land claims, because if they try to move forward based on those claims we will come close to war. I think Russia and countries surrounding China had best start thinking about the future – as it gets more powerful, China will become a greater threat to them.
‘Afghanistan is a rotten place for foreign troops’

RT: Let’s move on to Afghanistan. I know you recently had a trip planned there, but President Karzai said 'No' to it. What had you planned to do, and why do you think the president didn’t want to see you?

DR: Well President Karzai is a stooge of the Pakistanis. He is their boy in Afghanistan, and by the way our State Department kisses up to the Pakistanis and has done so for thirty years, which is one of the major reasons we’ve had problems down there.

RT: But isn’t it one of the major reasons that the US needs to do that, to keep Pakistan’s borders open for the flow of goods into Afghanistan?

DR: Who wants to be in Afghanistan? The Russians should understand that it is a rotten place to station foreign troops. What we’ve got is, Afghanistan’s policy has been manipulated by Pakistan and I think my recognition of the government that has been established after 9/11 does not reflect the values of the Afghan people. It’s a totally different structure: it’s a centralized system where Afghans demand more centralized authority in their villages and tribal leaders, and Karzai of course has no support. So as I’m pointing those things out, and the fact that he’s so tied into the Pakistanis, Karzai doesn’t want me around.

RT: So just to clarify, you don’t think the US and the NATO coalition should be in Afghanistan?

DR: I think we should get our butts out now, before any more US soldiers lose their lives in Afghanistan, as soon as possible.

RT: You have some perspective. I know when you worked with Reagan back in the 80’s…

DR: I fought in Afghanistan, I was there with the Mujahideen.

RT: Well you also said the Taliban wanted to establish a disciplined, moral society – what happened?

DR: No, that’s wrong, what happened was, I was opposing the Taliban every step of the way, and the Taliban were not the Mujahideen who defeated the Soviet Union, the Taliban were a creation of the Pakistani military intelligence.

RT: So you do not support the Taliban?

DR: Never, but there are two or three quotes that have come out because I was opposing them and then it was a fait accompli – they took over Kabul, and I tried to put on the most hopeful analysis for two or three weeks, then the Taliban started acting the way I always knew they would. After that I went to work in the nineties creating the coalition against the Taliban, based on the King of Afghanistan and what later became the Northern Alliance, so all of this nonsense is about two interviews that I did when I was trying to be optimistic.

RT: There’s a lot of concern that if and when there’s an exit from Afghanistan, there’s just going to be a devastating civil war that all the factions are already preparing for – training, boosting weapons, and it is going to be back to the Soviet days.

DR: Afghanistan has a very decentralized culture and system of power, and they have ethnic groups that have lived next to each other for centuries and these groups have known they have to have arms. They’re called warlords, but in fact they’re armed ethnic leaders that protect their group from other ethnic groups. That’s the way it’s been for centuries, so there’s nothing wrong with these people having arms, they always will – that’s their culture – but what’s happened is Pakistan's working through an alliance with one ethnic group, the Pashtuns, trying to dominate all of Afghanistan – that’s what the Taliban were all about. When the Taliban took over Kabul, 30,000 of these quote-unquote Taliban were actually Pakistani troops dressed up as Taliban. And when the US leaves, the most important thing is that those who have opposed the Taliban are not left vulnerable, and we can deal with that. For example, we can work with those in the Northern Alliance that defeated the Taliban originally, and make sure that they can.
Tweet