Posted by tin Posted on 5:12 PM with No comments 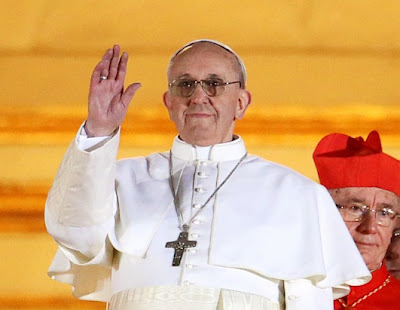 Pope Francis, 76, appeared on the central balcony of St. Peter's Basilica just over an hour after white smoke poured from a chimney on the roof of the Sistine Chapel
to signal 115 cardinal electors had chosen him to lead the world's 1.2 billion Roman Catholics.
"Pray for me," the new pontiff, dressed in the white robes of a pope for the first time, urged a crowd of tens of thousands of people waiting in the square below.

The choice of Bergoglio, who is the first Latin American and first Jesuit pope, was announced by French cardinal Jean-Louis Tauran with the Latin words "Habemus Papam" ("We have a pope.")

Francis has became the 266th pontiff in the Church's 2,000-year history at a time of great crisis, with the church under fire over a child sex abuse scandal and torn by infighting in the Vatican bureaucracy.

Although a conservative theologically, Francis is known for his concern for the poor and is expected to bring a radical change of style to the Church leadership, indicated by his choice for the first time of the name of St Francis of Assisi, who died in 1226 after living a life of poverty and simplicity.

He immediately showed the difference from his predecessor Benedict, an aloof theologian, with a gesture of humility, asking the waiting crowd to bless him before he blessed them.

Bergoglio shunned the papal limousine after his appearance on the balcony and chose to take a shuttle bus with other cardinals back to the Vatican residence where they are staying, for an evening meal.

Bergoglio is known as a humble man who leads an austere and sober life without ostentation, travelling by public transport and living in a small apartment outside Buenos Aires.

He is willing to challenge powerful interests and is deeply concerned about the social inequalities in Argentina and elsewhere in Latin America. He has had a sometimes difficult relationship with President Cristina Fernandez and her late husband and predecessor Nestor Kirchner.

Francis has spoken out strongly against gay marriage, denouncing it in 2010 as "an attempt to destroy God's plan".

Jubilant Argentines poured into churches, some crying and praying, after the announcement at the Vatican. "This is a blessing for Argentina," one woman shouted on a Buenos Aires street.

"I hope he changes all the luxury that exists in the Vatican, that he steers the church in a more humble direction, something closer to the gospel," said Jorge Andres Lobato, a 73-year-old retired state prosecutor.

The election was enthusiastically welcomed elsewhere in Latin America too.

"We're happy because we have a new pope and because the choice of a Latin American shows that the Church is opening, is now focused on the entire Church. It's not just a church only focused on Europe," said Leonardo Steiner, general secretary of the national conference of Brazilian bishops.

Francis was not among the small group of front runners identified before the election. The Jesuit order to which he belongs was founded in the 16th century to serve the pope. It is best known for its work in education and the intellectual prowess of its members.

The monks at the convent of St. Francis in Assisi were overjoyed at the election of Bergoglio and his decision to take the name Francis for a pontiff for the first time.

Italian theologian Massimo Faggioli told Reuters: "I don't expect him to change on doctrine, but he is a more pastoral person. It seems that this pope will be more aware of what life is all about."

Faggioli, a professor at the University of St. Thomas in Minneapolis, added: "He will have more room to make his message heard than Benedict did. The papacy needs to have an audience more open to listen to what the pope says. He is not an outsider. He didn't present himself as a reformer with hatchet in hand."

Bergoglio was born into a middle-class family of seven, his father an Italian immigrant railway worker and his mother a housewife.

Replacing Pope Benedict, who resigned last month, he overturned one of the main assumptions before the election, that the new pope would be relatively young.

Bergoglio is the oldest of most of the possible candidates and was barely mentioned in feverish speculation about the top contenders before the conclave.

He is the first non-European pope since Syrian-born Gregory III in the eighth century, and the third successive non-Italian pontiff.

The Vatican said his inaugural mass would be on March 19.

U.S. President Barack Obama said the election of Francis "speaks to the strength and vitality of a region that is increasingly shaping our world."

In brief remarks from the balcony of St. Peter's, Francis called on the faithful to pray for Benedict and said the Church was setting off on a "journey of fraternity, of love, of trust".

It seemed the cardinal electors "went to the end of the world" to find him, he said.

The Vatican said Francis would visit Benedict soon at his temporary home in the summer papal residence outside Rome.

Thousands of people sheltering from heavy rain under a sea of umbrellas had occupied the square all day to await the decision and the crowd swelled as soon as the white smoke emerged.

They cheered wildly and raced towards the basilica as the smoke billowed from a narrow makeshift chimney and St Peter's bells rang.

The tens of thousands in the square cheered even more loudly when Francis appeared, the first pontiff to take that name. "Viva il Papa (pope)," they chanted.

Front runners at the conclave had included Brazilian Odilo Scherer, and Italy's Angelo Scola, who would have returned the papacy to traditional Italian hands after 35 years of the German Benedict XVI and Polish John Paul II.

The decision by cardinal electors sequestered in a secret conclave in the Sistine Chapel came sooner than many experts expected because there were several front runners before the vote to replace Pope Benedict.

The cardinals faced a thorny task in finding a leader capable of overcoming crises caused by priestly child abuse and a leak of secret papal documents that uncovered corruption and rivalry inside the Church government or Curia.

Francis will head a Church also shaken by rivalry from other churches, the advance of secularism, especially in its European heartland, and allegations of scandal at the Vatican bank.

The series of crises is thought to have contributed to Benedict's decision to become the first pontiff in 600 years to abdicate.

Bergoglio was a moderate rival candidate at the 2005 conclave to the conservative Cardinal Joseph Ratzinger, who went on to become Benedict.

Italian media say he impressed cardinals in pre-conclave meetings where they discussed the Church's problems.

Reserved and humble, Francis does not fit the profile of an active preacher that many cardinals had previously said they were seeking. He studied chemistry before joining the priesthood nearly a decade after losing a lung to respiratory illness.

The secret conclave began on Tuesday night with a first ballot and four ballots were held on Wednesday. Francis obtained the required two thirds majority in the fifth ballot.

The previous four popes were all elected within two or three days.

In preparatory meetings before the conclave, the cardinals seemed divided between those who believe the new pontiff must be a strong manager to get the dysfunctional bureaucracy under control and others who are looking more for a proven pastoral figure to revitalize their faith across the globe.

Apart from Brazil's Scherer and Italy's Scola, a host of other candidates from numerous nations had also been mentioned as potential popes - including U.S. cardinals Timothy Dolan and Sean O'Malley, Canada's Marc Ouellet and Argentina's Leonardo Sandri.