Posted by tin Posted on 10:30 PM with No comments 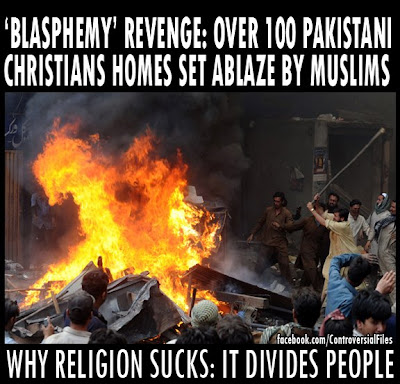 Over 100 homes owned by Pakistani Christians have been set ablaze by thousands of angry Muslims in the eastern city of Lahore.
Police said the violence was prompted by derogatory remarks against Prophet Mohammed, allegedly by a Christian resident.
Around 3,000 Muslim protesters took part in multiple simultaneous arsons of Christian homes, that belonged to low to middle-class families from the minority community.

Police say 25 houses were burnt, but witnesses put the number at far more than one hundred.

"At least 160 houses, 18 shops and two small churches were burnt by protesters," the independent Human Rights Commission of Pakistan (HRCP),Dr Ahmad Raza told AFP, as he was busy in rescue operations in the area.

Media reports, citing eyewitness accounts, claimed that protesters broke into the homes, looted them and burnt the remaining belongings outside.

There are no reports of any victims, but officials say 20 policemen were slightly injured during clashes, as they dispersed protestors from the neighborhood.

Sanitary worker and Christian, Sawan Masih, was charged with blasphemy by nearby residents after allegedly making humiliating remarks about Prophet Mohammed in a private conversation with barber Shahid Imran, three days prior to the act of vandalism, according to police official Multan Khan. It was Imran who is said to have complained of Masih’s behaviour.

The law enforcer also added that Masih was arrested on Friday, while the incident with alleged blasphemous remarks about Prophet Mohammed took place earlier on Wednesday. An account of the incident suggested that the young Christian was drunk. Fearing a backlash, Christians fled their homes, leaving possessions unprotected upon. Provincial law minister Rana Sanaullah promised that the government would not spare those involved in the attack, with cases already opened against those responsible for Saturday’s vandalism, noting that they will be prosecuted.

"These people committed a serious crime... there was no moral, legal or religious ground to indulge in such an act," he told journalists.

In an interview with the Express News Pakistani TV channel the minister said, that all those whose property had been damaged will be compensated within five days.

Spokesman for the All Pakistan Minorities Alliance, Shamaun Alfred Gill, also condemned the violence and demanded that the government provide security to Pakistani Christians.

96% of the population in Pakistan (around 173 million people) are Muslims, while only 1,6% profess Christianity (around 2.8 million). Blasphemy is considered there a very serious crime, with the country’s laws allowing the death penalty for anyone proven guilty.

Last year’s case against a 14-year-old Christian girl, who was held for three weeks in a high security prison for allegedly burning pages from the Koran, triggered an outcry both from the Pakistani population and the international community. After word of her alleged crime spread through the Muslim community, a mob threatened to burn the girl alive. Police later claimed that they arrested her for her own safety. The teenager could have been sentenced to life in prison if convicted, but the judge set her bail at approximately $10,500.

Out of court blasphemy is also a very sensitive issue in Pakistan, as allegations of insulting Islam or the Prophet Mohammed can trigger violent outbursts of public anger, even when unproven. Blasphemy allegations are believed to be frequently concocted in the country to persecute religious minorities and settle personal scores.
Tweet