Posted by tin Posted on 5:43 PM with No comments 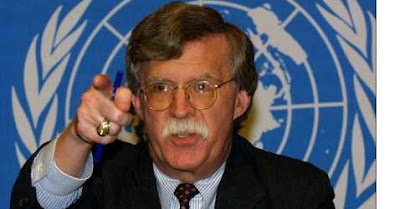 Prime Minister Benjamin Netanyahu has a “very short period of time” to decide whether to strike Iran’s nuclear infrastructure before Tehran possesses nuclear weapons,
warned former United Nations Ambassador John Bolton in a radio interview last night.
“Obviously in the short term Israel is focused on forming its own government,” stated Bolton.
“But I think assuming it’s Prime Minister Netanyahu forming that government he has a very short period of time in which to determine whether Israel will use military force knowing that the United States will not or whether Israel is prepared to allow Iran to get to the point where it has nuclear weapons.”
Continued Bolton: “I don’t know what Netanyahu’s decision will be but I do think he is very limited in how much time he has because every day that goes by allows Iran to put its nuclear capabilities beyond Israel’s powers to destroy.”
Bolton was speaking last night on “Aaron Klein Investigative Radio” on New York’s WABC Radio.
The former diplomat told Klein he doesn’t believe the Obama administration will take any military action against Iran.
“I don’t think it will come from the United States, that’s for sure,” Bolton said. “The question is whether at some point Israel acts in its own self defense as it has twice before when it struck Saddam Hussein’s reactor in 1981 and the Syrian reactor in September of 2007.”
Bolton’s comments come a week before President Obama is slated to visit Israel, with the topic of Iran likely to dominate discussions with Israeli officials.
By KleinOnline Staff
Tweet