Posted by tin Posted on 12:41 AM with No comments 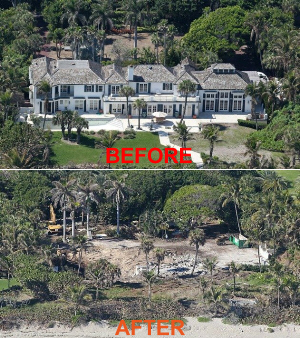 Tiger Woods Ex-Wife, Elin Nordegren, decided to enjoy her $100 million dollar divorce settlement, and bought a $12 million home in North Palm Beach, Florida.
Then she inexplicably demolished it, and now it’s nothing but rubble. Many were puzzled as to why she’d destroy a luxurious six bedroom. and eight bathroom mansion. The mainstream media simply said she didn’t like the house, and bulldozed it like a small child having an angry fit.

Mystic Investigation Paranormal News did some digging after hearing some rumors that this story may in fact be supernatural in nature. We found out the reason Elin destroyed the mansion was because it was infested with multiple poltergeists that were terrorizing her, and just her.

The poltergeists were acting in an unusual manner, and not targeting her kids as well. For a time she thought she was going crazy because nobody else was experiencing the demonic apparitions, the death curdling screaming in the dead of the night waking her from a sound sleep, the wretched sulfuric stinks, and sub-zero cold drafts.

Generally Poltergeists work alone, and never in concert targeting one person.  Unfortunately Ghosts r Us, and even a Catholic Priest known for exorcisms could not cleanse the home of the horrific evil.

To bad Elin didn’t contact us here at Mystic Investigations. We always get the job done no matter what because we’re the best in the paranormal business.
Her only option left was to destroy the huge house, and have the ground blessed by multiple Priests who actually bathed it with tons of holy water.

Now the hallowed grounds are ready for rebuilding after three separate metaphysical investigations firms confirmed the property was free of paranormal activity. Hopefully this will be the end of Ms.Nordegren’s supernatural problems. However we fear it won’t after researching the cause of the poltergeists infestation more completely.

The history of Elin, and the house was clean of any violence or Devil worship so the only explanation was that someone powerful sicked these demons upon her. We learned that it was a wicked witch who goes simply by the name Rexanna. Evidence indicates she was briefly linked as a Tiger Woods love interest but Tiger broke it off when he discovered she was into the dark Pagan arts. She was obsessed with him, and stalked him until he hired a powerful Warlock named Alexzano to repel her unwanted advances.

Apparently she feels great jealously over Tiger being seen with his ex-wife occasionally which is understandable since they have children together.