Home » » Slavery in the Chocolate Industry

Slavery in the Chocolate Industry

Posted by tin Posted on 10:47 PM with No comments 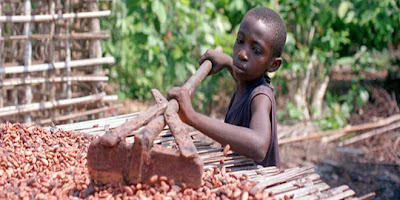 All food has some dark side we’d rather not think about. Eating meat involves killing animals, and that’s not pleasant. Eating tuna kills dolphins that get caught in the fishing nets. But eating chocolate causes real human misery that can be easily stopped.


Chocolate is a product of the cacao bean which grows primarily in the tropical climates of West Africa and Latin America. The cacao bean is more commonly referred to as cocoa, so that is the term we will use throughout. Two West African countries, Ghana and the Ivory Coast, supply 75% of the world’s cocoa market.The cocoa they grow and harvest is sold to a variety of chocolate companies, including some of the largest in the world.


In recent years, a handful of organizations and journalists have exposed the widespread use of child labor, and in some cases slavery, on West African cocoa farms.Since that time, the industry has become increasingly secretive, making it difficult for reporters to not only access farms where human rights violations still occur, but to then disseminate this information to the public. For example, in 2004 a journalist was kidnapped and remains missing today. More recently, three journalists from a daily newspaper were detained by government authorities in the Ivory Coast after publishing an article about government corruption related to the cocoa industry.
Americans are the leading world consumers of chocolate. We import 729,000 tons of cocoa beans costing $15 billion annually and consume about 4 billion pounds of chocolate every year. Most of the consumer chocolate comes from Hershey and Nestle (USA) as well as Cadbury (UK), who buy their cocoa products from suppliers like Archer Daniels Midland who, in turn, secure their raw cocoa from Africa’s Ivory Coast.
It’s been 200 years since the abolition of slavery in most countries. But in the Ivory Coast, the slave trade is booming like never before. The UN estimates that 15,000 Malian adolescents are kept as slaves there.

The Worst Forms of Child Labor

In West Africa, cocoa is a commodity crop grown primarily for export. As the chocolate industry has grown over the years, so has the demand for cheap cocoa. Today, cocoa farmers barely make a living selling the beans and often resort to the use of child labor in order to keep their prices competitive.
The children of West Africa are surrounded by intense poverty and most begin working at a young age to help support their family. Some children end up on the cocoa farms because they need work and they are told the pay is good. Other children are “sold” by their own relatives to traffickers or to the farm owners, and it has also been documented that traffickers often abduct the young boys from small villages in neighboring African countries, such as Burkina Faso and Mali.
Once they have been taken to the cocoa farms, the children may not see their families for years, if ever. When a child is delivered to the farm by a family member, that relative collects a sum of money either up front or at the end of an agreed duration of labor. Unfortunately, the relatives do not realize that the children will be exposed to a dangerous work environment and deprived of an education.
Most of the children are between the ages of 12-16, but children as young as 7 have been filmed working on the farms. Some only stay for a few months, while others end up working on the cocoa farms through adulthood.
A child’s workday begins at sunrise and ends in the evening. The children climb the cocoa trees and cut the bean pods using a machete. These large, heavy, dangerous knives are the standard tools for children on the cocoa farms. Once the bean pods have been cut from the trees, the children pack the pods into large sacks and carry or drag them through the forest. “Some of the bags were taller than me. It took two people to put the bag on my head. And when you didn’t hurry, you were beaten.” – Aly Diabate, former cocoa slave.
Holding a single large pod in one hand, the children strike the pod with the machete and pry it open with the tip of the blade, exposing the cocoa beans. Each strike of the machete has the potential to severely cut a child’s fingers or hand. Virtually every child has scars on the hands, arms, legs or shoulders from accidents with the machete.
In addition to the hazards of using a machete, children are also commonly exposed to agricultural chemicals on the West African cocoa farms.Tropical regions such as the Ivory Coast consistently have to deal with prolific insect populations and choose to spray the pods with large amounts of industrial agricultural chemicals. Without protective equipment, children as young as 12 spray the pods with hazardous chemicals.
The farm owners often provide the children with the most inexpensive food available, such as corn paste and bananas. In some cases, the children sleep on wooden planks in small windowless buildings with no access to clean water or sanitary bathrooms. Again, they may live in these conditions for months or even years.
Most of the children are unable to attend school while they are working, which is a violation of the International Labor Organization (ILO) child labor standards. Depriving these children of an education has many short-term and long-term effects on their lives. The children of the cocoa farms have little hope of ever breaking the cycle of poverty.