The truth behind Michael Jackson death

Posted by tin Posted on 7:21 PM with No comments 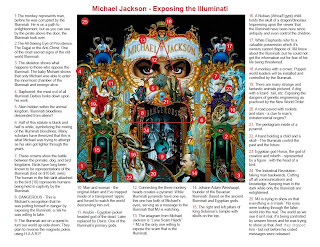 Michael Jackson, the King of Pop, died on June 25, 2009.  The Los Angeles County Coroner declared Michael's death a homicide caused by drugs that had been administered to him.
Dr. Conrad Murray was charged with his death.

And if the Illuminati had their way, that would be the end of the story.  But the truth is much more sinister.  Conrad Murray is simply a scapegoat of ... the Illuminati.

The story they don't want you to hear involves Michael's lifelong affiliation with the Illuminati, an affiliation that ended in his untimely death.  Since his days in the Jackson Five, Michael was taught the secrets of the Illuminati.  This is part of the Illuminati's longstanding plan to recruit popular performers.  The Illuminati use these performers to insert subliminal mind control messages in their songs.  After achieving the rank of King of Pop, Michael began to realize the danger the Illuminati presented to mankind and approached the CIA offering to spill the secrets in exchange for protection.

Michael knew he could not speak out directly against the Illuminati.  His only course of action was to hide hidden messages in his album artwork as a means to pass information to the public and his CIA handler.  He did so at great risk to himself, and he paid the ultimate price when the Illuminati were tipped off by some of the song titles on the Dangerous album.  "Remember the Time" was written as an ode to Michael's pre-Illuminati days.  "Keep the Faith" was a coded message to like minded Illuminati defectors to keep the faith.  Michael sensed his days were numbered.

Fearing the Illuminati could shut him down at any moment, Michael included "Will You Be There" in the Free Willy soundtrack as a signal to his CIA handler that he needed immediate extraction and requesting confirmation that the CIA would be at the predetermined meeting place to take him into protective custody.  Unfortunately, "Will You Be There" became known to almost everyone as "The Free Willy Song."  The tragic result was the CIA failed to catch the message.  When Michael showed up at the meet, his cover was blown.  The Illuminati initially attempted to discredit him through child molestation charges.  When that failed, the illuminati killed him.