Home » Conspiracy , Politics » There was no Sabah Referendum Sabah was cheated by federal state of Malaysia

Posted by tin Posted on 3:15 PM with 4 comments 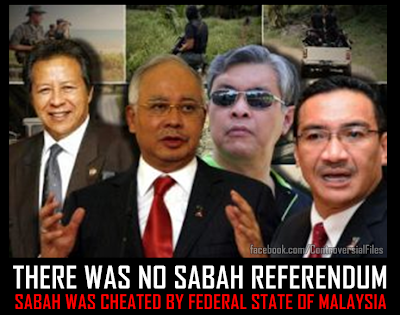 “There has never been a referendum on Sabah as stated by some academics.“In fact, the so-called referendum in 1962-63 was actually only a sampling survey of less than four percent of the Sabah population,” he said in response to Najib’s comments on Sabah yesterday.

Najib said there was no question of Sabah not being within Malaysia.

Said Najib: “On the question of polemics of whether Sabah is a part of Malaysia, I want to stress that the issue had been finalised in 1978 and Sabah is a valid region in Malaysia,” he said.

He said the Cobbold Commission had held a referendum and two-thirds of the people in Sabah agreed to the state being a part of Malaysia. The commission also obtained the recognition of the United Nations.

But Jeffrey, who also heads the Sabah chapter of the State Reform Party (STAR), said the Malaysia Agreement which incorporated terms of the Cobbold Commission “is yet to be implemented”.

“Najib must realise that Sabah belongs to the people of Sabah.

“Malaysia does not own Sabah as the Malaysia Agreement is yet to be implemented. Sabah is not a piece of lifeless property to be fought over between the Philippines [Sulu claim] and Malaya.

“Therefore, any talks between Malaysia/Malaya and the Philippines must include Sabah because only the people of Sabah can decide what they want.

“The [Sulu's] Sabah claim, whether valid or not, must be resolved once and fo all by bringing all the relevant parties to the table within the ambitof Britain and the United Nations and find a peaceful solution,” he said.

He added that “the time has come to review the implementation of the Malaysia Agreement and ensure its viability and survival by addressing the unhappiness of the other remaining partners – Sabah and Sarawak”.

Jeffrey also pointed out that it was vital that the federal government clean up the mess created by (former prime minister) Dr Mahathir Mohamad and Umno in Sabah which had put Sabah and its citizens at perpetual risk.

“They made Sabah insecure by supporting Muslim rebellion in the Philippines and supplying them weapons, giving them refuge and training facilities in Sabah and, worst still, by deploying them as voters in Sabah through the ‘Project IC Mahathir’, despite knowing full well that the same group of people from the Philippines have unsettled claims over Sabah.

“To restore confidence, the federal government must clean up the mess. Umno should leave Sabah politics to Sabahans and local political parties.”

Jeffrey said the Sulu invasion was proof that Malaysia and successive prime ministers, including Najib, had failed miserably to secure the safety and security of Sabahans.

“Now that the fear felt by Sabahans has become a reality, Najib, as the current premier, must not only guarantee the security of Sabahans but he must also restore their confidence because security was the number one reason why Sabahans agreed to be part of Malaysia in 1963,” said Jeffrey.

He said Najib “has a moral duty to put things right” in Sabah.

“That is why we Sabahans supported the RCI [Royal Commission of Inquiry] as part of a necessary action to put things right.

“But that is not enough. A lot more needs to be done to regain the confidence of the people of Sabah who feel cheated by the federal government,”
Tweet