Posted by tin Posted on 2:43 AM with No comments 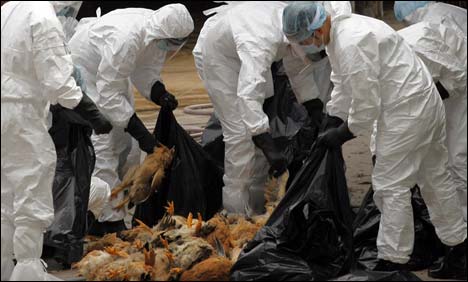 The H7N9 bird flu strain is on the rise, having already killed 22 people in China while infecting 108. That's a kill rate of 20% -- among the highest ever witnessed in a bird flu strain.


It has also spread outside of China, infecting a Taiwan national who brought the infection back to Taiwan and now rests in critical condition in a Taiwan hospital.

Health authorities in the region haven't yet said this strain of bird flu has achieved human-to-human transmission, but it seems increasingly likely that such a trait either already exists or will develop very quickly. That's because the virus has been spreading among chickens without any symptoms showing. It doesn't make the chickens sick, in other words, allowing chickens to be "stealth carriers" of a virus that can easily leap to unsuspecting humans.

H7N9 is a "triple reassortment" virus that combines genetic code from three different flu virus strains. This makes it "...one of the most lethal influenza viruses that we've seen so far," said Keiji Fukuda, the assistant director-general for health security with the World Health Organization. "This is an unusually dangerous virus for humans."

Because the virus can quietly spread among non-symptomatic chickens, hundreds more people have almost certainly already been infected with it. In the coming weeks, we will likely see yet more victims hospitalized and killed by H7N9.

As Yahoo News reports, WHO's China representative Michael O'Leary has released figures showing that half the people infected with H7N9 had no contact with poultry.

If true, this would be strong evidence that H7N9 has already achieved "human-to-human transmission," turning it into a "nightmare influenza" that might already be spreading across the population. That status is not proven yet, however, and more observation is needed before such a conclusion could be substantiated.

"If H7N9 were to stably adapt to humans, it would probably meet with little or no human immunity," writes Peter Horby from Nature.com. "Detecting and tracking a partially human-adapted H7N9 virus in a city as vast as Shanghai or Beijing would be difficult; tracking a fully adapted virus would be impossible. And it could easily spread nationally and internationally. Eastern China is now one of the most 'connected' population centers in the world. Seventy per cent of the global population outside China lives within two hours of an airport linked to the outbreak regions by a direct flight or a single connection (see go.nature.com/tvfev8). Travel restrictions or border screening will not contain pandemic influenza for long."


Beware of the vaccine hype

Of course, we all have a right to be skeptical about any bird flu fear mongering. We know that both the WHO and the CDC routinely hype infectious disease for the primary purpose of pushing vaccine sales.

The WHO famously declared a "stage six pandemic" in the last influenza outbreak, and only later did we learn that most of the decision makers at WHO were receiving financial kickbacks from vaccine manufacturers.

For all we know, in fact, it's the vaccine companies that are actually developing and releasing these bioweapons in China in order to sell more vaccines. That exact scenario has already been described by a Chinese colonel...


Is H7N9 a U.S. government bioweapon?

Colonel Dai Xu of the People's Liberation Army said in early April that H7N9 was a bio-psychological weapon engineered by western powers and released in China in order to destabilize the region. His comments were dismissed by the Chinese government, but behind the scenes many people think he may be correct.

We already know, for example, that the U.S. Army routinely works on developing deadly new strains of influenza as part of its bioweapons research. This is not disputed. It's also true that bioweapons have gone missing from U.S. government laboratories, including the Galveston National Laboratory in Texas.

So the idea that a biological weapon developed by the U.S. government might find its way to China is not as far-fetched as it might first seem.

There's also the fact that the U.S. and China are already at war in many covert ways. China routinely steals U.S. military secrets, for example, and the U.S. is openly engaged in an aggressive currency war that's hurting China. Meanwhile, China is playing "debt war games" with America's debt holdings, even while the U.S. is eroding the value of that debt through a process of currency creation via the Fed.

There's a lot more going on behind the scenes than you'll ever find reported on CNN, and the idea that this may have entered the realm of bioweapons isn't unreasonable. Besides, a pandemic also serves the interests of the state, because any time there's a panic, most people instinctively look to government to save them.