Home » » Which gives you cancer sooner: Cigarettes or diet soda?

Which gives you cancer sooner: Cigarettes or diet soda?

Posted by tin Posted on 5:51 PM with No comments 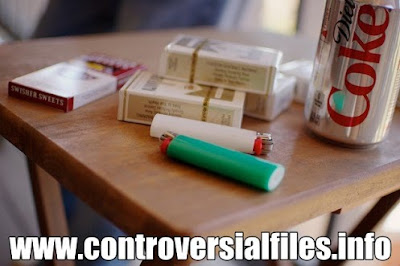 Most people who smoke a pack a day of cigarettes know they are treading on thin ice regarding their health,
but how many people realize that drinking 30 or more ounces of diet soda each day could prove to be more lethal than a pack of cigarettes? And how can diet soda be worse than regular soda? Even though there are over 4,000 chemicals in one commercial cigarette, the leading chemical in diet soda may actually be breeding more cancer cells in human beings, and thus leading to malignant tumors sooner in life, according to recent research. (http://naturalsociety.com)
Could cancer be the end result of depression? Killing brain neurons and expediting cell death may be killing people faster than lung cancer, and chronic depression is fuel for overwhelming cell mutation and the taking over of organs by mutagenic warped cells, also known as blood cancer. (http://www.holisticmed.com/aspartame/)People who smoke cigarettes are locked into a vicious cycle of boosting their ambition and dopamine levels with a highly addicting drug, nicotine. The cigarette hangover, which begins with smoking 4,000 chemicals and then waiting for the nicotine to subside, is just the beginning of lung cancer and the mutation of cells.Cancer thrives in an acidic body where the cells are deprived of oxygen and nutrients. Yet, even worse than cigarettes are artificial sweeteners, which fool the body into ingesting them, as if they are food, and polluting the cleansing organs with mutagens. Some research shows the body never excretes all of the aspartame, sorbitol, sucralose or saccharin. When a human consumes Equal, Splenda, Nutrasweet, Sweet-n-Low, etc., their cleansing organs, like the liver, kidneys, and pancreas are overworking and malnourished. You cannot live without these organs. Aspartame is GMO, so the blood is infected, with synthetic carcinogens (which it does not release properly, if ever) which cause central nervous system (CNS) disorders and make you hungrier! That's right, synthetic sugars drive hunger and actually make most people put on weight. How ironic, right? (http://www.naturalnews.com/033914_Splenda_Essentials_sweetener.html)It is proven that obesity is a driving force of cancer, so whether you consume excess SUGAR or ARTIFICIAL SWEETENERS, you are feeding the same destructive forces in your body, in your cells, changing your DNA, and the long term effects have "no cure." So, when it all boils down to it, drinking 3 or 4 diet sodas per day is more dangerous than smoking a pack of cigarettes, about 20 cigarettes, in one day. Although diet sodas contain less chemicals than cigarettes, these specific "diet" chemicals are choking cells and mutating DNA at a higher rate, leading to chronic disorders of the digestive track, breakdown of the CNS and ultimately leads to the development of cancerous tumors. It is "programmed cell death" and your mitochondria cells are basically suffocating. If you combine toxic food and toxic medications prescribed by Western doctors (MDs), the addictions being "programmed in" are like programming an early death.(http://www.zenantidiet.com/)There is no prescription drug, and there never will be one, which cures the problems that artificial sweeteners create. Over 70 percent of reported cases of fibromyalgia, chronic depression, IBS and acid reflux are caused by consuming chemical agents which have been approved by the FDA.(http://www.naturalnews.com) The good news is that there are natural cures for both diet soda addiction and cigarette addiction.Don't eat cancer, don't smoke cancer, and eat organic food onlyWant to QUIT the NICOTINE ADDICTION? Want to quit smoking and be smoke-free for life, using a natural method the Health Ranger recommends? Check out 14AndOut, the all natural method to stop smoking in 14 days or less: (http://premium.naturalnews.tv/14AndOut__TV.htm)Want to QUIT the DIET SODA ADDICTION? Want to stop eating "cancer" and learn about hundreds of chemicals posing as food, so you can filter them out of your daily intake? Check out the book Don't Eat Cancer available as a full color download:(http://programs.webseed.com/Dont_Eat_Cancer__TV.htm)
Tweet