Home » Mystery » The man who lived with an alien, UFOs over Parliament... and the little girl who wanted answers

The man who lived with an alien, UFOs over Parliament... and the little girl who wanted answers

Posted by tin Posted on 8:24 PM with No comments 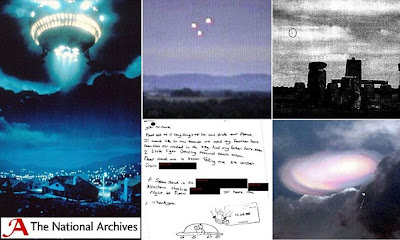 From cigar-shaped spacecraft in the night sky to abduction by aliens, they are the tales that have captivated the imagination of Earthlings for nearly a century.

And now the Ministry of Defence has revealed its latest batch of reports from people claiming a close encounter in the UK.

The sightings only go up to 2009, as that was the year the ‘British X-Files’ desk was closed.

Spookily, that year also saw a trebling in the frequency of UFO reports, the newly declassified files show. The Ministry of Defence has revealed its latest batch of reports from people claiming a close encounter in the UK. The sightings only go up to 2009, as that was the year the 'British X-Files' desk was closed. Above, a UFO over Stonehenge in Wiltshire in January 2009 The year 2009 saws the second highest number of reports recorded by the MoD - totalling 643 - beaten only by the 750 sightings in 1978, the year Close Encounters Of The Third Kind (pictured) was released in UK cinemas
More than 600 alien experiences were reported to the MoD’s UFO hotline, more than double the previous year and three times the usual number, according to the papers released by the National Archives.

The files from 2007 to 2009 reveal several of bizarre reports of encounters with extraterrestrials, including a man who claimed he lived with an alien, UFO sightings near the Houses of Parliament and Stonehenge, and a man whose dog and tent were abducted.
They also reveal the claim by one man to have developed a weapon to shoot down UFOs.

Some experts say there was a simple, non-sinister reason why the number of sightings soared in the hotline’s final year of operation – a rise in popularity of Chinese lanterns being released at weddings and other events. It was the second highest number of reports recorded by the MoD, beaten only by the 750 sightings in 1978 – the year Close Encounters Of The Third Kind was released in UK cinemas.


Another peak had occurred in the mid-1990s, when the US TV show The X-Files was at the height of its popularity.

Dr David Clarke, author of the book The UFO Files based on earlier MoD data, said: ‘There are many reasons why the number of reports trebled in 2009.

'Many of the sighting accounts – such as formations of orange lights moving slowly across the sky – describe the appearance of Chinese lanterns even though people did not recognise them at the time.’ The first description of a UFO was from a sighting made in US in 1947, although Met Office reports a quarter of a century earlier had included data on unexplained phenomena.

In 1952, Prime Minister Winston Churchill took the issue so seriously that he ordered reports of sightings to be kept secret to avoid public panic.

But during its 50 years of collecting and investigating reports, the UFO desk and hotline uncovered no evidence to indicate the existence of ‘any military threat to the UK’. Steven Spielberg's take on alien life, the film ET released in 1982
The files reveal that one person phoned the hotline to report twice seeing UFOs hovering over the Houses of Parliament in London in February 2008.

He described ‘green, red and white lights’ that remained still in the sky for an hour and a half.

‘I didn’t see anything in the sky at the time. Upon uploading them to my computer, though, I spotted the discoid shapes in the background.’

Another email said photographs of Blackpool Pier taken in October 2008 showed aircraft that had not been visible at the time. The UFO desk investigated and an official said two of the objects ‘look like stunt kites’ and the third ‘looks like a seagull head-on’.

The MoD axed the department – which had no US equivalent and which by 2009 had only one officer – because it served ‘no defence purpose’ and was diverting resources from ‘more valuable defence-related activities’, the files reveal.

There were also fears that its existence encouraged spurious UFO reports.

When the announcement of the closure was made, MoD officials predicted a backlash from ufologists convinced that the truth was still out there.


Many wrote to the Queen, Prime Minister Gordon Brown and ministers to demand sightings were investigated.

The files are available to download at www.nationalarchives.gov.uk/ufos.
And the little girl who asked for the truth...

A young girl wrote to the UFO desk about aliens saying she had seen ‘little air crafts’ in the sky.


She continued: ‘Please tell me what the truth is I’ve a right to know’, the files reveal.

The letter the child sent included a picture of an extraterrestrial in a spaceship waving and asked whether there is life on other planets.

The MoD replied thanking the writer, from Altrincham, near Manchester, for the letter and sent some RAF ‘goodies’. The schoolgirl’s letter reads: ‘To Mr/Mrs. Please tell me if living things live out side our planet. I would like to now [sic] because me and my father have seen little air crafted [sic] in the sky.


‘And my father have seen 2 little light dancing around each other.

‘Please send me a letter telling me the answer.’

The MoD wrote back to her saying: ‘Thank you for your letter asking if there is life outside our planet.

‘It’s an interesting question and we remain totally open-minded about it, but we don’t know of any evidence to prove life exists in outer space.

‘We do look at reports of “unidentified flying objects” but only to see if the country’s airspace might have been affected but we haven’t had any evidence of this so far.