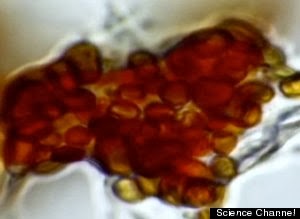 A two-month rain storm in southern India may be the most compelling evidence yet that extraterrestrial lifeforms have visited Earth.
Between July 25 and Sept. 23, 2001, the Indian state of Kerala was drenched by bizarre red-colored rain unlike any seen previously, according to the latest episode of"The Unexplained Files," airing Sept. 25 on the Science Channel.Godfrey Louis, a physicist based in Kerala, analyzed drops of the rain expecting the strange color would be a result of dust particles. But that didn't turn out to be the case.
"Dust particles do not have this irregular shape," Louis said in the program. "They are not transparent like this."
Louis noticed something else when he analyzed the crimson-colored water droplets under the microscope. In his opinion, the particles appeared to be alive, with some superficial similarities to blood cells -- although closer inspection revealed they were not blood cells.
At first, the official report from the Center for Earth Science Studies attributed the red rain to an exploding meteor that fell to Earth in the area a week before the first red rainstorm.
After working with the Tropical Botanic Garden and Research Institute, the official explanation was changed to spores, according to the Indian Express.
Researchers at Stintec, a lab in Sri Lanka, found something more shocking. Even though the so-called "spore cells" were replicating, not one trace of DNA could be found.
Louis believes that the spores were on the meteor that exploded over Kerala prior to the rainstorm.
He said research showed that the supposed space cells managed to continue replicating even under temperatures exceeding 572 degrees Fahrenheit.
"It was growing at temperatures that would kill other lifeforms," Louis said on the show.
British-based astrobiologist Chandra Wickramasinghe believes that the "alien rain" theory is not only plausible, but likely, especially since 100 tons of space rock hits Earth daily.
"The existence of life outside the Earth is amazingly regarded as an extraordinary hypothesis, but I would argue that the extraordinary hypothesis is that this tiny minute piece of dust we call the Earth is the center of life in the universe and that no life exists even next door to it," Wickramasinghe told the program.
Earlier this year, Wickramasinghe also announced he had discovered tiny fossils inside a meteorite found in Sri Lanka in December. He used this finding to promote "panspermia," a theory that life exists throughout the universe and is distributed by meteoroids and asteroids.
Louis and Wickramasinghe's red rain theories are inspiring a storm of controversy, but the possibility of actual proof that life on other planets is clouded with some chilling realizations.
Earlier this year, researcher Anil Samaranayake released a paper in the Journal of Cosmology suggesting that the cells found in red rain pose a possible risk to Earth.
"A high concentratrion of uranium was found in the outer crust of the unicellular organisms," Samaranayake said.
Tweet