Posted by tin Posted on 2:38 AM with No comments 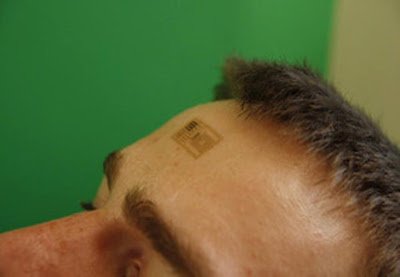 A team of engineers today announced a discovery that could change the world of electronics forever.
Called an "epidermal electronic system" (EES), it's basically an electronic circuit mounted on your skin, designed to stretch, flex, and twist — and to take input from the movements of your body.
EES is a leap forward for wearable technologies, and has potential applications ranging from medical diagnostics to video game control and accelerated wound-healing. Engineers John Rogers and Todd Coleman, who worked on the discovery, tell io9 it's a huge step towards erasing the divide that separates machine and human.

Coleman and Rogers say they developed EES to forego the hard and rigid electronic "wafer" format of traditional electronics in favor of a softer, more dynamic platform.

To accomplish this, their team brought together scientists from several labs to develop "filamentary serpentine" (threadlike and squiggly) circuitry. When this circuitry is mounted on a thin, rubber substrate with elastic properties similar to skin, the result is a flexible patch that can bend and twist, or expand and contract, all without affecting electronic performance.

How Will We Wear Our Second Skin?

So what can an EES really do for us? The short answer is: a lot. In the paper describing their new technology, published in this week's issue of Science, the researchers illustrated the adaptability of their concept by demonstrating functionality in a wide array of electronic components, including biometric sensors, LEDs, transistors, radio frequency capacitors, wireless antennas, and even conductive coils and solar cells for power.

We asked Rogers what he thought were the most promising applications for the new technology. He said medicine was the most compelling:

Our paper demonstrates our ability to monitor ECG (as a monitor of heart disease and metabolism), EMG (as a measure of, among other things, gait during walking) and EEG (as a measure of cognitive state and awareness).

We have also shown that these same devices can stimulate muscle tissue to induce contractions. When combined with sensing/monitoring, such modes of use could be valuable in physical rehabilitation. We also have interest in sleep monitoring (for sleep apnea), and neo-natal care (monitoring premature babies, in particular).

According to Rogers, the electronic skin has already been shown to monitor patients' health measurements as effectively as conventional state-of-the-art electrodes that require bulky pads, straps, and irritating adhesive gels. "The fidelity of the measurement is equal to the best existing technology that is out there today, but in a very unique skin-like form," he explained.

>>>>>Eroding the Distinction Between Machine and Human

Outside the context of biomedicine, the EES's inconspicuous nature opens up a whole world of possibilities. The patches are already barely noticeable, but when mounted directly onto a temporary tattoo, for example, any evidence of electronic circuitry disappears. Coleman said:

[This technology] provides a huge conceptual advance in wedding the biological world to the cyber world in a manner that is very natural. In some sense, the boundary between the electronics world and the biological world is becoming increasingly amorphous. The ramifications of this are mind-blowing, to say the least.

I envision endless applications that extend beyond biomedical applications. For example, we could use the exact same technology – and specifically its discrete tattoo-like appearance – to perform covert military operations where an agent could communicate to the command station with these electric signals without ever speaking a word.