Posted by tin Posted on 10:56 PM with No comments 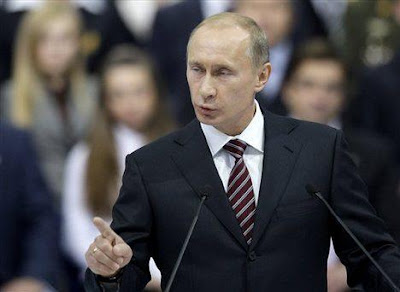 Vladimir Putin has raised fears of a revival of the USSR after he revealed plans to create a so-called ‘Eurasian Union’ of former Soviet nations.
The Russian prime minister – who regained his presedency – wants the bloc to become ‘one of the poles of the modern world’, and a rival to the United States, the European Union and Asia.

In the past, Mr Putin has lamented the collapse of the Soviet Union in 1991 as the ‘greatest geopolitical catastrophe of the 20th century’. But he denies the Kremlin’s proposed new alliance is an attempt to rebuild Russia’s old communist empire.

Instead, Mr Putin – who has effectively led the country for more than a decade, first as president, a prime minister and now as president again – claims the union would merely act as ‘an efficient link between Europe and the dynamic Asia-Pacific region’.

His assurances will do little to convince some ex-Soviet nations, however, many of whom are already suspicious of the Kremlin’s intentions.

Alexander Dugin, a political scholar, said the ‘Eurasian Union’ would become one of Mr Putin’s chief policies as president.

He added: ‘From the geopolitical viewpoint it represents an attempt to revive the USSR.’

The concept of Eurasia, the huge area of land mass comprising Russia and some of its European and North Asian neighbours, was first featured in George Orwell's dystopian fantasy 1984.
Under Orwell's vision of a Totalitarian dystopia after the Second World War, the UK falls into civil war and is integrated to Oceania, a society ruled by the dictatorship of 'the Party'.

At the same time, the USSR annexed continental Europe and created the second superstate of Eurasia.

The novel's third state, Eastasia is made of large regions of East Asia and Southeast Asia.

The novel describes the story of Winston Smith, who records how the world's three superstates are constantly fighting for the unconquered lands of the world.

Smith recounts the Atomic Wars fought in western Russia, North America and Europe, and describes how 'the Party' referred to the postwar reorganisation of society as 'the Revolution'.
Tweet