Posted by tin Posted on 11:03 PM with No comments 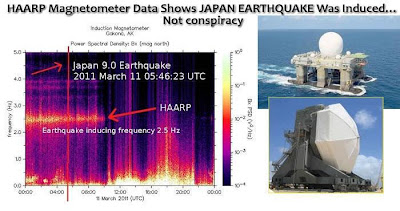 Above is a time-frequency spectrogram, which shows the frequency content of signals recorded by the HAARP Induction Magnetometer. This instrument, provided by the University of Tokyo, measures temporal variations in the geomagnetic field (Earth's magnetosphere) in the ULF (ultra-low frequency) range of 0-5 Hz. Notions have been added to the image to show you what was happening the day the Japan earthquake and tsunami struck.

By looking at the accompanying HAARP spectrum chart above you can see when the 9.0 magnitude earthquake struck -- red line drawn vertically -- and what was happening before and after the earthquake. What you can also see is a constant ULF frequency of 2.5 Hz being recorded by the magnetometer. The ULF 2.5 Hz frequency is evidence of an induced earthquake. The chart recorded this constant before, during and after the 9.0 magnitude earthquake struck.
On March 11, 2011 the 2.5 Hz ULF frequency was being emitted and recorded from 0:00 hours to about 10:00 hours -- or for 10 hours. We know for a fact that the Japan earthquake lasted only a few minutes so why was the earthquake signature frequency (2.5 Hz) being recorded for 10 hours on the morning of March 11, 2011? Because a HAARP phased array antenna system was broadcasting (transmitting) the 2.5Hz ULF frequency and it triggered the Japan earthquake and ensuing tsunami.

If you go to HAARP's official website you can see for yourself that the 2.5 Hz ULF frequency wasn't only being broadcated for 10 hours, it was constantly being broadcasted for 2 days prior to the earthquake. Broadcasting began on March 8, 2011, just before midnight as you can see on HAARP's website page.

Click on the Next Day link to see that the earthquake inducing 2.5 Hz ULF frequency was being broadcasted for the entire days of March 9, 2011 and March 10, 2011. Even though the signature frequency of an earthquake was shown throughout March 9 and March 10 there were no constant earthquakes occurring off the east coast of Japan.

What is the significance of a 2.5 Hz ULF broadcast?

The natural resonance of an earthquake is 2.5 Hz. Scientists working for the United States military discovered this using the phased array antennas at the HAARP facility in Alaska. HAARP's own charts suggests that earthquakes occurred constantly for 3 days. We know for a fact that they haven't.

The HAARP magnetometer data provides proof that the Japan earthquake was not a naturally occurring quake -- it was triggered. This data shows us that a HAARP military installation was broadcasting the known earthquake signature frequency in order to trigger a major earthquake.

The broadcast was most likely being transmitted from a floating HAARP system like the floating Sea-Based X-Band Radar platform that can be moved anywhere in the Pacific or Atlantic ocean under the protection of a carrier strike group -- like the USS Ronald Regan.

The military vessel includes power plant, a bridge, control rooms, living quarters, storage areas and the infrastructure necessary to support the massive X-band radar. The SBX radar is the most sophisticated phased array, electro-mechanically steered X-band radar in the world -- according to Boeing claims.

The phased array antenna consists of thousands of antennas driven by transmit/receive modules. The radar is designed and built by Raytheon Integrated Defense Systems for Boeing, the prime contractor on the project for the United States Missile Defense Agency (MDA). Boeing, Raytheon and MDA exists -- also not a conspiracy theory.
Tweet