Home » news » MONITORING ASIA IN PROPHECY: THE RISE OF ASIAN SUPERPOWERS AND THE DOWNFALL OF AMERICA.

MONITORING ASIA IN PROPHECY: THE RISE OF ASIAN SUPERPOWERS AND THE DOWNFALL OF AMERICA.

Posted by tin Posted on 7:06 PM with No comments 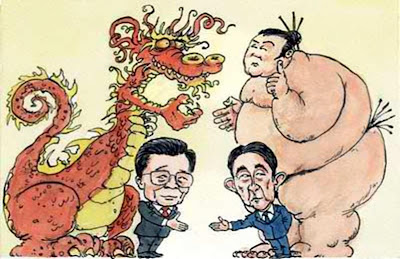 "JAPAN AND CHINA TO START DIRECT CURRENCY TRADING"
TOKYO: Tokyo said Tuesday it will start direct currency trading with China for the first time, scrapping the dollar as an intermediary unit for the first time to push business between the two Asian economic giants.

Japan's Finance Minister Jun Azumi said the deal between China and Japan, the world's second- and third-largest economies respectively, will see the system of setting yen-yuan rates via their US dollar values set aside.

The move is aimed at boosting trade and investment between the traditional rivals, and according to Japanese media it is unprecedented for Beijing to allow a major currency other than the greenback trade directly with the yuan.

"From June 1, the yen-yuan exchange rate will be constantly indicated in both markets, facilitating full-fledged direct exchange trading," Azumi told a regular press briefing, according to Dow Jones Newswires.

By not using the dollar as an intermediate currency "we can lower transaction costs and reduce settlement risks at financial institutions as well as making both nations' currencies more useful", Azumi added.

Trading under the new regime will start in Tokyo and Shanghai on June 1, Azumi said.

China overtook Japan to become the world's second-largest economy in 2010, and the neighbours are forging closer business ties despite frequent diplomatic spats over territorial claims and lingering historical animosities.

China is Japan's largest trading partner, but about 60 percent of their mutual trade is denominated in US dollars.

In March, Japan said it had won approval from Beijing to buy Chinese government bonds for the first time -- Beijing does not allow investors to freely purchase its debt, requiring official approval instead.

Tokyo said it got the green light to buy Chinese government bond issues worth about 65 billion yuan ($10.25 billion), a relatively small amount with Azumi saying at the time that the investment was "an appropriate amount for the initial purpose of strengthening bilateral economic ties".

The economic powerhouses have also agreed to promote the use of their currencies in bilateral transactions -- such as yuan-denominated foreign direct investment by Japanese companies in China -- to reduce foreign exchange risks.

The moves come as Beijing looks to internationalise the yuan in a long-term bid to turn the unit into a global currency rivalling the US dollar.

Japanese finance officials have vowed to step into currency markets again to tame the value of the unit, which is increasingly seen as a safe-haven currency as the euro takes a hit owing to worries about the debt-hit eurozone.
Tweet