Home » Religion » The Story of the Three Kings - Yes, they were actually kings.

The Story of the Three Kings - Yes, they were actually kings.

Posted by tin Posted on 7:08 PM with No comments 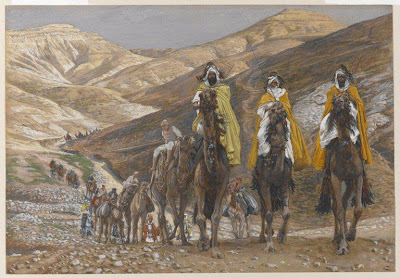 Little is said in the New Testament about these wise men. Popular legend has greatly filled out the Biblical story.
It makes them three rich and powerful monarchs:-Caspar, King of Tarsus, the land of myrrh; Melchior, King of Arabia, where the land is ruddy with gold, and Balthasar, King of Saba, where frankincense flows from the trees.

According to some authors these kings were of the race of Balaam, the Old Testament prophet, who had prepared the Gentiles for the coming of Christ into the world. He had foretold that a new star should appear in that part of the sky under which lay the land of Judea, and had warned his descendants that when they saw the star they should follow it and should go to adore a great king who would be born somewhere in Judea and be Lord of the Universe.

Even from the time of Balaam, it is added, sentinels had been posted upon a mountain towards the east, in order that as soon as the star rose into view they should give notice of it to the lords of the country, that the latter might go without delay to pay reverence to the new king. This notice, as it happened, was not necessary in the case of Caspar, Melchior and Balthasar. Being very wise and learned kings they were under the special care of the Holy Spirit, who informed them in person of the appearance of the star.

Each of them at once gathered together a retinue of servants, as well as troops of horses, camels and dromedaries, all of which were laden with the choicest products of their respective countries. Then they started out in search of the new born king. They looked up to the star as their guide, for it moved forward as they moved, and they well knew that it had been sent to show them the way.

Where the three kings met is not told, but they arrived in Jerusalem together. As soon as they had entered the city gates the star which had guided them disappeared.

Now this was in accordance with the will of God,that on the failure of their starry guide the kings might make inquiries in the capital of Judea, and by these means publish abroad the birth of the Son of God. Hence Herod and the Jews in general could have no excuse for ignoring this great event, and "the care and diligence of the Magi would reprove their negligence and indifference, because having Christ so near them, they did not seek Him, while these strangers came from distant countries for this cause alone."

And in fact the three kings, as they rode through the streets of Jerusalem, asked of every one they met: "Where is He who is born King of the Jews? We have seen the star and have lost it."

None could give them any information, for no one in Jerusalem had seen the star. One of the writers who tells this legend pauses to praise the "holy boldness" with which the Magi published a new king in Jerusalem without having fear of Herod who might have been capable of putting them to death for this cause. This writer quotes with approval the words which Saint John Chrysostom later addressed in imagination to the kings.

"Tell me, oh good kings, do you not know that whoever proclaims a new king in the life of a reigning king is liable to death, that you do this thing, and thus place yourselves in manifest danger from Herod, who may easily command you to be put to death?"

The same writer quotes with similar approval Saint John's answer to his own question: "The faith of these kings was so great and the love they bore to the new-born King so fervent, that even before they had seen Him they were ready to die for love of Him."

The news of how three great kings, with a vast following of servants and beasts of burden had arrived in Jerusalem soon reached the ears of King Herod. He was greatly troubled when he heard that they had come in quest of a new-born King of the Jews, well knowing that the kingdom of Judea did not belong to him by succession or by birth, but that he had received it as a reward from the Romans, who had unjustly taken possession of it.

The first thing he did was to call together all the wise and learned men of Jerusalem, and ask them what the prophets had said about the coming of the Messiah, and the place where he would make his first appearance on earth.

And when they answered that the babe would be born in Bethlehem he was still more troubled. He at once sent out messengers to invite the kings to his palace, where he prepared a great banquet for them. After they had feasted he advised them to continue their journey as far as the little town of Bethlehem, where they might come upon the object of their quest.

"If you find that the child of prophecy has been born there," he added, "hasten back and tell me the joyful news that I, too, may come and worship Him."

The kings promised to do as Herod bid them, little knowing the guile and deceit that festered in his wicked heart. Then they resumed their journey.

No sooner had they issued out of the gate of Jerusalem than the star once more appeared in the sky, to their great joy. Following it, they arrived at the house where, thirteen days before, Christ had been born.

Here the star stood still, burning even more brightly than ever, as if to say,

"Here is He whom you seek; this is the palace of the new-born King; this is the court of heaven, since here its King has His abode."

Strange and complex must have been the emotions these wise men felt in their hearts when they saw what the star showed them-this chamber of the King whom they sought, a place more suitable for beasts than for men; since not for men but for beasts had it been prepared.

Within the stable the virgin mother was watching over the manger, wherein lay her Divine Son. Her quick ear caught the sound of footsteps and hoofbeats outside the door. In great alarm she lifted the Child out of the manger and encircled Him with her arms. This was the attitude in which the three kings, entering, found the mother and the Child.

The scales fell from their eyes at the sight. They now realized that it was in truth no human king who had been born into the world, but the King of Heaven who had taken upon himself a human form. Throwing themselves upon their knees, one by one they approached him, and worshipped him as God and the Savior of man.

Then they presented Him with their gifts which had now acquired a new meaning. Caspar's gold testified that the babe was a king, Melchior's frankincense showed that he was God, and Balthasar's myrrh was a reminder that he was a man and doomed to suffer a painful death.

For gold was kept in kings' treasuries, frankincense was burnt in divine worship, and myrrh was used in embalming the bodies of the dead.

The infant Jesus returned their offerings with gifts more precious still. For gold He gave charity and spiritual riches, for incense, faith, for myrrh, truth and meekness.

That night the kings were warned in a dream that they should not go back by way of Jerusalem because King Herod cherished evil designs against the child Jesus, but that they should return by other roads to their own kingdoms. They obeyed in all meekness and humility.

When Herod found that the three kings had returned home without fulfilling their promise to him he was greatly wroth. It was then that he issued his edict commanding that all children under the age of two years should be put to death. He hoped that the Messiah would be slaughtered among the rest. But, as the New Testament tells us, the Holy Family received a special warning from heaven and fled into Egypt before the emissaries of wicked King Herod could reach them.

As to the three kings, when they had arrived, each at his own capital, they cast aside their royal robes and abandoned their royal state. Giving all their goods to the poor they wandered about the earth announcing that the Savior of man had been born in Bethlehem.

Seven years after the death of Christ upon the cross the wise men were found in India by Saint Thomas, once the doubting disciple, now become firm in the faith, and an apostle to the East. Saint Thomas baptized them in the name of the Father and the Son and the Holy Ghost, and they too became missionaries of the gospel. In the end they fell martyrs for their faith and their bodies were all buried together outside the walls of Jerusalem.

Three hundred years passed away. Then Saint Helena, mother of the Emperor Constantine, made her famous pilgrimage to Palestine. Though she was quite eighty years of age she was still full of life and vigor. All her time and energies she devoted to the discovery of early Christian remains. She is credited with the finding of the cross on which Christ suffered and the tomb in which He was buried.

She also identified the tomb of the Three Kings and carried their bodies away with her, on her return journey to Constantinople, to re-bury them in the church of Saint Sophia. Later the remains were transferred to Milan and later still to Cologne. There they are still shown, in a side chapel of the great Cathedral of Cologne, lying in a golden shrine-their grinning skulls girt with golden crowns, and their skeleton bodies clad in royal purple, bedecked with jewels of enormous value.
Tweet