Posted by tin Posted on 1:54 AM with No comments 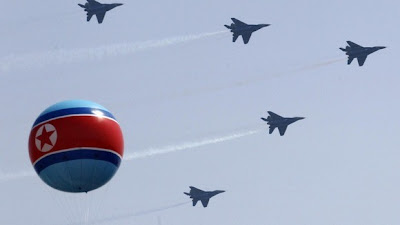 SEOUL, March 13 (Yonhap) -- North Korea's air force has sharply increased jet fighter training flights in the past few days,
with the number of sorties reaching as many as 700 on the day South Korea and the United States launched a joint war game earlier this week, a military source in Seoul said Wednesday.
The North's move is seen as part of efforts to beef up combat readiness and to closely monitor joint drills in the South that began on Monday. The drill, called Key Resolve, involves about 10,000 Korean troops and 3,000 American personnel as well as military weapons and equipment, including F-22 stealth jets and B-52 bombers deployed from overseas U.S. bases.   "Flights of North Korean air force's fighter jets and helicopters reached about 700 sorties on March 11," the source said on the condition of anonymity. "It is seen as unprecedented in scale."   The recent sortie is nearly six times more than the maximum number of flights in a day during last year's summer training, the source said.   The impoverished nation is known to have restricted flying time to save hard currency as its fighter jets depend on imported fuel. North Korea is believed to have accumulated about 1.5 tons of fuel for wartime use, according to military officials.   The latest move comes as the communist nation is preparing a mass military drill along its eastern coast, and activities of submarines and warships have also increased along its east and west coasts.   After the U.N. Security Council slapped a new round of sanctions on Pyongyang over its third nuclear test last month, the North Korean leader Kim Jong-un has made a series of visits to artillery troops near the western sea border urging his soldiers to be on high alert and ready for war.   While tensions over a military conflict are rising on the Korean Peninsula, Seoul's defense ministry said on Tuesday there were no signs of an imminent attack or additional nuclear tests for the time being, but he stressed it would strike back if the North launches any provocation on the South.   About 28,500 American troops are stationed in South Korea, as the 1950-53 Korean War ended in an Armistice Agreement.   Ahead of the joint drills, Pyongyang threatened to cancel the Armistice Agreement and to cut the hotline between the two countries, but Seoul said the mutual agreement cannot be unilaterally canceled.   The North shut down a Red Cross hotline on Monday morning.