Posted by tin Posted on 1:39 AM with No comments 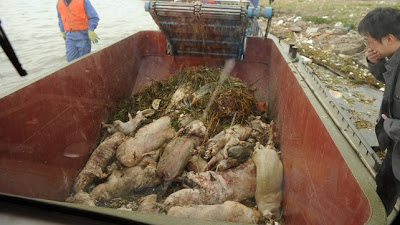 The number of dead pigs found floating in a river flowing into Shanghai has reached nearly 6,000.

The Shanghai municipal government said in an online announcement that 5,916 swine carcasses had been retrieved from Huangpu River.
It insisted that municipal water remains safe.
The surge in the dumping of dead pigs - believed to be from pig farms in the upstream Jiaxing area in the neighbouring Zhejiang province - has followed police campaigns to curb the illicit trade of pork products harvested from diseased pigs.
Shanghai authorities said the city has taken proper measures to safely dispose of the pig carcasses and that the city's water plants are stepping up efforts to disinfect public water and testing for six common swine viruses.
The Shanghai government reported no major swine epidemic, widespread pig deaths or dumping of pigs within the city boundaries of Shanghai.
The state-run China News news agency said on Monday that Zhejiang province had reported no swine epidemic but that a provincial agriculture official blamed cold weather for the deaths of the pigs.
The official said the practice of dumping dead pigs into rivers lingers among some pig farmers in the city of Jiaxing.
Shanghai authorities have been pulling out the swollen and rotting pigs since last Friday.
rte.ie
Tweet