Posted by tin Posted on 8:45 PM with No comments 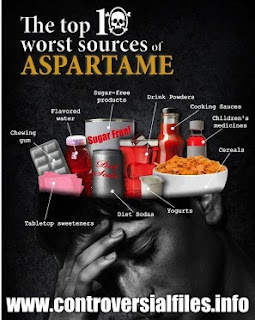 You probably already know that the FDA has declared war on raw milk and even helped fund and coordinate armed government raids against raw milk farmers and distributors.
Yes, it's insane. This brand of tyranny is unique to the USA and isn't even conducted in China, North Kora or Cuba. Only in the USA are raw milk farmers treated like terrorists.
But now the situation is getting even more insane than you could have imagined: the International Dairy Foods Association (IDFA) and the National Milk Producers Federation (NMPF) have filed a petition with the FDA asking the FDA to alter the definition of "milk" to secretly include chemical sweeteners such as aspartame and sucralose.Importantly, none of these additives need to be listed on the label. They will simply be swept under the definition of "milk," so that when a company lists "milk" on the label, it automatically includes aspartame or sucralose. And if you're trying to avoid aspartame, you'll have no way of doing so because it won't be listed on the label.This isn't only for milk, either: It's also for yogurt, cream, sour cream, eggnog, whipping cream and a total of 17 products, all of which are listed in the petition at FDA.gov.As the petition states:IDFA and NMPF request their proposed amendments to the milk standard of identity to allow optional characterizing flavoring ingredients used in milk (e.g., chocolate flavoring added to milk) to be sweetened with any safe and suitable sweetener -- including non-nutritive sweeteners such as aspartame.This is all being done to "save the children," we're told, because the use of aspartame in milk products would reduce calories.Milk industry specifically asks to HIDE aspartame from consumersAstonishingly, the dairy industry is engaged in extreme doublespeak logic and actually arguing that aspartame should be hidden from consumers by not listing it on the label. Here's what the petition says:IDFA and NMPF argue that nutrient content claims such as "reduced calorie" are not attractive to children, and maintain that consumers can more easily identify the overall nutritional value of milk products that are flavored with non-nutritive sweeteners if the labels do not include such claims. Further, the petitioners assert that consumers do not recognize milk -- including flavored milk -- as necessarily containing sugar. Accordingly, the petitioners state that milk flavored with non-nutritive sweeteners should be labeled as milk without further claims so that consumers can "more easily identify its overall nutritional value."In other words, hiding aspartame from consumers by not including it on the label actually helps consumers, according to the IDFA and NMPF!Yep, consumers are best served by keeping them ignorant. If this logic smacks of the same kind of twisted deception practiced by Monsanto, that's because it's identical: the less consumers know, the more they are helped, according to industry. And it's for the children, too, because children are also best served by keeping them poisoned with aspartame.Consumers have always been kept in the dark about pink slime, meat glue, rBGH and GMOs in their food. And now, if the IDFA gets its way, you'll be able to drink hormone-contaminated milk from an antibiotics-inundated cow fed genetically modified crops and producing milk containing hidden aspartame. And you won't have the right to know about any of this!The FDA confirms this "secret" status of aspartame, stating, "If the standard of identity for milk is amended as requested by petitioners, milk manufacturers could use non-nutritive sweeteners in flavored milk without a nutrient content claim in its labeling."This is a clue to stop drinking processed milk and milk products altogetherThere's a bigger story here than just the industry hoping to get FDA approval to secretly put aspartame in milk products while not listing aspartame on the label.The bigger question is this: If an industry is pushing to hide aspartame in its products, what else is it already hiding?How about the pus content of its dairy products? How about its inhumane treatment of animals who are subjected to torture conditions and pumped full of genetically engineered hormones? How about the fact that homogenization and pasteurization turn a whole food into a dietary nightmare that promotes obesity, autoimmune disorders and cardiovascular disease?There are lots of dirty little secrets in the dairy industry of course, and that doesn't even get into the secret closed-door conversations to encourage the FDA to destroy the competition of raw milk.The only rational answer to all this is to stop buying and consuming processed dairy products, period!I gave up ALL milk products many years ago and have never looked back. I drink almond milk, not pus-filled pasteurized cow's milk. (Click here for a recipe to make your own almond milk at home.) I don't eat yogurt. If I want probiotics, I get them from tasty chewable probiotics supplements such as Sunbiotics. I parted ways with processed dairy products many years ago, and as a result, my cardiovascular health, skin health, digestive health and stamina have all remained in outstanding shape.There's also a philosophical issue here: Don't buy products from an industry that habitually LIES about everything. The dairy industry is like a mafia. They actively seek to destroy the competition, keep consumers ignorant and monopolize the market. They run highly deceptive ads with ridiculous claims like, "drinking milk helps you lose weight" and other nonsense.The U.S. dairy industry is steeped in deception at every level, and now they want you and your children to unknowingly drink aspartame that's secretly blended into the product.The dairy industry is to food as Lance Armstrong is to sports. It's all a big lie, laced with secret chemicals and false claims.Stop drinking milk. Stop financially supporting the food mafia.
Tweet