Posted by tin Posted on 8:42 PM with No comments 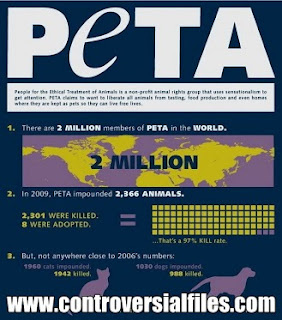 While the organization’s name implies it is a group of “People for the Ethical Treatment of Animals,” Daily Mail Onlinereported that PETA “killed almost 90 percent of dogs and cats placed in the care of the shelter at its Virginia headquarters last year.”
PETA told Mail Online that the animals they take in at the center are “unadoptable.”On Feb. 12, 2012, The Daily Caller reported that the nonprofit Center for Consumer Freedom published documents online, obtained by a Freedom of Information Act request, showing that PETA killed a staggering 95.9 percent of the adoptable pets in its care during 2011.Despite years of public outrage over its euthanasia program, the notorious animal rights group has continued killing adoptable animals at its Norfolk, VA headquarters, at an average of 37 pets every week.Since 1998, a total of 27,751 pets have died at the hands of PETA workers.“PETA provides no-cost, veterinarian-supervised humane medical euthanasia to any animal in their community who requires it for a current crisis of illness, injury, or emotional devastation,” states the organization’s website, "Why PETA Euthanizes.""We are doing the dirty work that others won't," The Telegraph quoted Daphna Nachminovitch, PETA’s vice-president for cruelty investigations saying in April 2009. "We are proud to be a shelter of last resort that takes in old broken animals and gives them a humane end.”However, Dave Shishkoff said he saw perfectly-healthy looking puppies and kittens killed when he worked as an intern with PETA in 1991."The vast majority of the animals PETA kills are far from terminal or suffering from incurable conditions,” Shishkoff said, adding that “PETA claims to have a $30 million annual budget,” “millions of members and huge lists of email addresses” but still can’t manage to “find a home for about 2,000 cats and dogs each year.”"PETA has a perverse definition of euthanasia,” Shishkoff concluded of his experience as a PETA intern, “one that apparently demands that any animal with the slightest discomfort ought to be killed.”Various reports posted by Nathan J. Winograd -- including legal testimony from local veterinarians and shelter workers – also give evidence that “many of the pets killed at PETA headquarters were impeccably healthy, some of them puppies and kittens.”Nathan Winograd – founder of the No Kill Advocacy Center and described on his website as being active in the animal rights movement “for the past 20 years” – has dedicated his life to exposing the truth “about PETA’s killing” and how the ASPCA and the Humane Society of the United States “have betrayed the cause they theoretically exist to promote.”On Feb. 3, 2010, Examiner’s Dave Gibson wrote that, while PETA decried activities on Groundhog Day as “cruel” and “called for the replacement of Punxsutawney Phil with a robotic look-alike,” two PETA employees -- Adria J. Hinkle, 27 and Andrew B. Cook, 24 both of Norfolk, Va. -- were arrested on June 15, 2005 and charged with 31 counts of felony animal cruelty.According to a report by Catholic Online in Feb. 2012, Hinkle and Cook described the animals they killed as “adorable” and “perfect.”On March 10, Winograd published a series of heart-breaking photos of some of the animals killed by Hinkle and Cook. Among them were puppies and a mother cat with two kittens.On Jan. 18, 2006, Human Events reported that Dr. Patrick Proctor – a veterinarian of the Ahoskie Animal Hospital (AAH) – relinquished the mother cat and her kittens to Cook and Hinkle because they promised to give the animals to a good home. Proctor said they “were in good health and were very adoptable, especially the kittens.”Proctor, who was called in by police to examine one of the dead animals found in the dumpster, said it was “a very healthy six-month puppy.”Barry Anderson, an animal control officer from neighboring Bertie County, confirmed to Proctor that a cat and two kittens were among the 13 additional dead animals found in the van.Proctor – who estimated that he had handed over more than 50 animals to PETA under the promise they would find a home -- said “PETA will never pick up another animal from my practice.”Winograd described “the van” as “a donor-funded slaughterhouse on wheels.”While PETA is best-known for its anti-fur campaigns, featuring naked models and actors, other ads sparked much controversy and outrage.A 2008 campaign aimed at children - "Your Mommy Kills Animals" - featured a graphic cartoon image of a woman in pearls and apron ripping apart a rabbit with a knife for fur.Also in 2008, NBC reported that PETA was even pressuring Ben & Jerry's ice cream to replace cow's milk with human breast milk in their products.A most egregious ad campaign in 2009 -- "Holocaust on your plate” -- depicted images of caged chickens next to Jewish concentration camp inmates and worse, a photo of the stacked bodies of dead Jewish concentration camp victims next to a pile of dead pigs.Even Germany's highest court ruled the advertisement as “an offence against human dignity.”"We are complete press sluts,'' Michael Specter wrote quoted of PETA founder Ingrid Newkirk's admission for The Guardian in April 2003.“I would go to work early, before anyone got there,” Newkirk also confessed of her early days as PETA’s self-appointed euthanasia matriarch, “and I would just kill the animals myself.”(I must have killed thousands of them, sometimes dozens every day.)On March 17, Winograd launched a new website -- “Why PETA Kills” -- where he published still more photo evidence of PETA’s cruelty to the animals left in their “care,” along with disturbing testimonials from former PETA staff members who witnessed the horrific abuse.“So, examine the documents, and read the divergent commentary,” Douglas Anthony Cooper invited in his Feb. 5 article for The Huffington Post. “And then -- unless you simply don't give a damn about the innocent creatures that require our protection -- I suggest that it is your ethical duty to make a decision.
Tweet