Posted by tin Posted on 5:45 PM with No comments 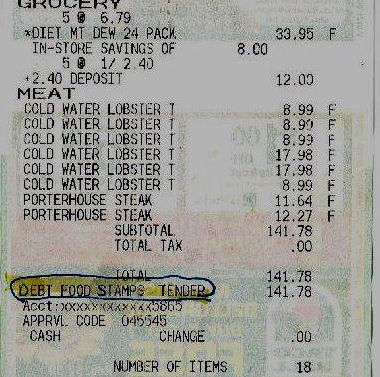 Documents obtained through the Freedom of Information Act (FOIA) reveal the Obama administration is actively marketing the federal food stamp program (SNAP) to illegal immigrants. A Spanish-language flyer obtainer by Judicial Watch says, "You need not divulge information regarding your immigration status in seeking this benefit for your children."
A copy of the document is viewable by clicking here.

Although it's far worse now, this has been going on for years. Back in 2006, Judicial Watch wrote in its Corruption Chronicles: "The United States Department of Agriculture is spending taxpayer money to run Spanish-language television ads encouraging illegal immigrants to apply for government-financed food stamps."

Nearly $75 billion of taxpayer money is spent each year on federal food stamps, and it turns out some of that is alarmingly being handed out to illegal immigrants -- people who contribute nothing to the federal tax base in America but who seem to be experts on collecting social welfare benefits of all kinds. If you are working for a living, you are buying food for illegals who are being actively recruited by Obama and the democratic party so that they will vote more democrats into office.

Sen. John Thune (R-SD) and Rep. Marlin Stutzman (R-IN) are reportedly working on a bill that would prevent the Obama administration from marketing food stamp benefits to illegals, reports Breitbart.com.


Food stamp expenditures explode under Obama"Since President Obama came into office, SNAP participation has increased at 10 times the rate of job creation, the annual spending on SNAP has doubled, and one in seven Americans now participates in SNAP," Thune said. "This explosive growth in both the SNAP enrollment and federal cost of the program is alarming and requires lawmakers to take cost-effective legislative control measures."

As the U.S. government's own website admits, the federal food stamp program (SNAP) has increased from just 2.8 million people in 1969 to nearly 47 million people in 2012. Expenditures have now reached nearly $75 billion a year.

As previously reported, recipients of federal food stamp money can use it to buy soda pop, birthday cakes and even luxury seafood items. Soda companies are currently raking in $4 billion a year from federal food stamps.

As the grocery receipt on the right shows, people are using food stamps to purchase lobster and porterhouse steaks. Food stamp recipients, who include illegal immigrants, are using taxpayer money to load up on lobster and steak.

It also turns out you don't even need to be poor to collect federal food stamps. "A federal audit revealed last year that many who don't qualify for food stamps now receive them under a new 'broad-based' eligibility program that disregards income and asset requirements," reports Tom Fitton at Breitbart.com.

Food stamp recipients can buy all the junk food they want, but they are prohibited from buying vitamins or nutritional items. The big banks like JP Morgan Chase collect billions of dollars a year off the transaction fees supporting the SNAP program.


SNAP promotes junk food, big banks and illegalsThe truth about the federal food stamp program is that it promotes junk food companies, transaction profits for big banks and of course illegal immigrants. JP Morgan, by the way, donated more than $800,000 to Obama's 2008 election campaign, and after the election, Obama worked to explode the food stamp program, generating countless millions of dollars in transaction revenues for JP Morgan.

This program, administered by the USDA, is really nothing more than a nationwide handout program to bribe voters into voting for big government. While I have nothing against people relying on federal food stamps to help them through a temporary, short-term crisis, what we have today is generations of voters who live on food stamps and other welfare programs. Far from being programs of "compassion" to help those in need, these programs have ballooned into grotesque, unethical systems of lifelong dependency that destroy dignity and train voters to live like helpless victims rather than capable human beings.

But that's the way the democratic party wants it, of course: the more people they can trap in a cycle of poverty living on handouts from big government, the more votes they can win at the ballot box. He who promises the most handouts wins the elections, it seems, and there's no reversing it once the welfare hoards exceed 50% of the popular vote. We are dangerously close to that level right now, and once we cross it, there's no turning back from financial suicide. The voters will simply vote themselves bigger and bigger handouts until financial parasitism guts the entire economy and leads us all into a financial apocalypse.

At that point, we'll be dealing with what I call the food stamp zombie hoards -- tens of millions of people who have no idea how to work for a living, partially lobotomized by junk foods and vaccines, roaming the streets in a desperate search for food because their government benefit cards stopped working. That scenario deserves another article altogether, so I'll save the details for later.

But make no mistake: the Obama administration wants to put millions of illegals on federal food stamps, then it wants to grant them "amnesty" citizenship so that they keep voting more democrats into office. They, in turn, will keep pushing more and more handouts until the country finds itself trapped with an 80% tax rate (like France), a 50% unemployment rate, and a cultural invasion of former Mexican nationals who inherently support socialism, political corruption and the abolishment of individual liberties.

Spread the word: We must STOP the growth of SNAP and return it to sanity. For starters, no non-citizen should receive federal food stamp benefits. But that idea seems alien to today's Washington bureaucrats who are trying as hard as possible to turn America into the next Mexico.