3 Common Sense Reasons Why the Trinity is a False Doctrine

Posted by tin Posted on 8:08 PM with No comments 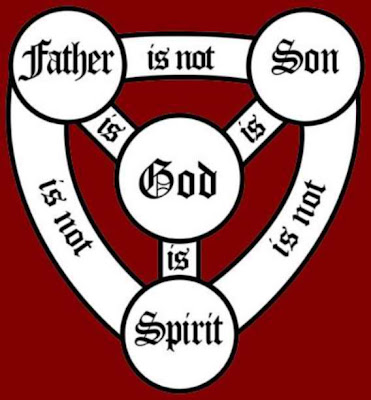 Here is a short, straightforward argument that exposes the doctrine of the Trinity as a man-made apostasy. Three common sense reasons that cannot be disputed.

#1. No Authority at Nicea
First, lets set this up with a brief history lesson. The Trinity was cautified nearly 300 years after Christ and the original Apostles had been killed off. Christians had been persecuted and had gone underground for much of this period to avoid being fed to lions--remember that? Even though Christianity was splintered and leaderless at this time, it was the one common thing that was found throughout the then declining Roman Empire.

Under that setting, the Nicean Council and the formation of the Trinity doctrine was ordered, led and ultimately approved by the Roman Emperor Constantine as part of his political campaign to unite factions of the failing Roman Empire under one state religion. Not a lot of people dispute this fact, but Trinity believers try to "spiritualize" this history by making Constantine into a holy man who was led by God to do what he did. While there is NO evidence for this, there are lots of reasons to believe that he was doing it for strictly political purposes. To this day there is a debate about whether or not Constantine was even baptized a member of the Church--which Christ said was necessary to be saved. (See John 3:5)

Think about it. A somewhat analogous equivalent today would be if the President of the United States gathered up all the Christian denominations of the day, had them mash-up their differing beliefs, and made a church from the consensus--a single religion for the the whole country. And it would all be lead and approved by, not a religious leader, but a political leader.

There weren't even any of the Christian leaders or attendants that claimed to be the head authority of the church at the time. They all pretty much laid down any authority to the Emperor. And just like in politics, the beliefs of the majority were adopted--just like Constantine wanted. Of the two factions that had a disagreement about the character and nature of God and Christ, the majority opinion won the debate, and the losing belief was denounced as heresy. Ask yourself when, if ever, difficult religious doctrines are approved by the majority? Do you think we'd have 10 commandments if it was put up for a vote? I doubt it.

#2. The Unknowable God
The Trinity Doctrine is impossible to understand, yet understanding our relationship to God is central in gaining salvation and understanding many other gospel doctrines. In fact the Bible tells us that our very eternal life depends on knowing HIM.

John 17: 3 - And this is life eternal, that they might KNOW thee the only true God, and Jesus Christ, whom thou hast sent.

Bottom line, the 3-in-one monster conjured up by the Trinity is an unknowable being. The Trinity is confusion, and that is NOT of God, but of the devil.(See 1 Cor. 14: 33)

Honest theologians and priests will even admit that there is no way to "understand" the Trinity. They will argue that the mortal mind cannot grasp it but only "comprehend" some of it, but even that is a stretch when the scripture states that our very eternal life depends on KNOWING Him.

I also believe that if there was one doctrine that we should fully understand, it SHOULD be the one about the character and nature of God, and that he'd be a mean son of a gun to give us no way of understanding this very basic and important aspect of the gospel.

If you know anything about the history of the Nicean council, you also know that the framers of this gibberish themselves actually knew that what they were outlining was incomprehensible. That leads you to another problematic question... If the theologian/writers of the Trinity KNEW it was beyond the understanding of men. Then, as MEN, how do they know that they got it right in the first place?

That leads us to the final part of the argument. The lack of spiritual evidence that this doctrine is accepted by God...

#3. Lack of ANY Spiritual Confirmation or Manifestation
As I have argued, this is a key doctrine that is pivotal to understand which touches most if not all other gospel principals and doctrines, yet there is no evidence of spiritual manifestations, or any kind of confirmation by the spirit for the conclusion of Nicea.

Again, anyone who takes time to read and study the history of the Nicean Creed will be struck by the strictly political atmosphere of the whole event--thats it.

If you take your examples from the Bible you will notice that most all of the major events in scripture were attended by angels, had manifestations of the Holy Spirit, or miraculous happenings of some sort or another. Yet at Nicea, none of the attendants reported angels appearing, cloven tongues of fire, or even a simple voice from heaven. Everything went off like a session of congress with everybody trying to please the Roman Emperor.

If this IS a pivotal doctrine, why wouldn't there be SOME record of a miraculous occurance that could be pointed to as acceptance by God?

So there you have it. I think these common sense reasons are valid and very strong against the Trinity being a true doctrine. I believe that most Christian Churches of the day have accepted it simply because it is a tradition. If you can argue against any of this, I'd love to hear it.
Tweet