Home » Religion » What if the Pope was really the antichrist

What if the Pope was really the antichrist

Posted by tin Posted on 8:13 PM with 2 comments 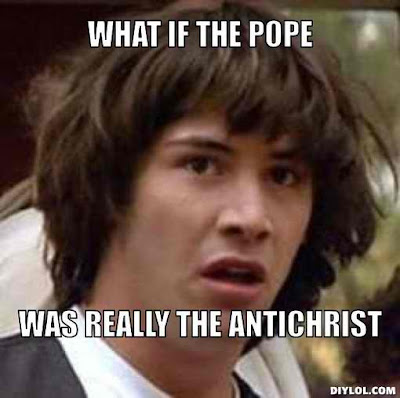 The world is expecting the antichrist to come in the near future. Will the antichrist announce his arrival when he gets here?
An essence of evil surrounds the term antichrist, and evil rarely works openly. Instead, evil usually wears a facade of righteousness to cover its real character in order more easily to deceive.

THE ANTICHRIST HIDES BEHIND A FACADE.

What better facade than a “church” to cover the antichrist’s real identity? The Bible tells us that Satan, the devil, “deceives the whole world.” (Revelation 12:9). Everyone in the world has been deceived by the devil and by his agent, the antichrist.

Hitler has been thoroughly condemned by the world for murdering six million Jews during the Second World War. This holocaust is frequently talked about even today, and many books have been written on this subject condemning Hitler and his associates.

During the Dark Ages the Catholic Church slaughtered over 150 million Christians, and this atrocity is never mentioned today! The world has almost completely forgotten the many millions of people who were burned at the stake by the papacy because they wanted to worship God according to the Bible.

The slaughter in Bosnia, Kosovo, Serbia, and Croatia is a direct result of the Vatican’s involvement in this area, but you will never hear about it because the Jesuit-controlled news media not only refuse to mention it but they lie about the situation to keep the papacy from being suspected of their true involvement.

A secular history book declares: “That the Church of Rome has shed more innocent blood than any other institution that has ever existed among mankind, will be questioned by no Protestant who has a competent knowledge of history.” — W. E. H. Lecky, History of the Rise and Influence of the Spirit of Rationalism in Europe, (reprint: New York: Braziller, 1955), Vol. 2, pp. 40-45.

The papacy still claims that it has a right to slaughter so-called “heretics,” as it did in the Dark Ages.

“The Church of Rome says that she has a right to punish with the confiscation of their goods, or the penalty of death, those who differ in faith from the Pope.” Charles Chiniquy, Fifty Years in the Church of Rome, The Wickliffe Press, Protestant Truth Society, Wickliffe Avenue, 104 Hendon Lane, Finchley, London, N3., 1885, p. 376.

Soon the papacy will once again attain enough raw political power to repeat the atrocities of the Dark Ages. Once again the Catholic Church will slaughter true Christians for wanting to worship God according to the Bible. Regardless of how impossible this seems to us today, once again the papacy and its agents will plunge the world into another dark age.

A QUOTE FROM ABRAHAM LINCOLN ABOUT THE CIVIL WAR

“This war would never have been possible without the sinister influence of the Jesuits. We owe it to Popery that we now see our land reddened with the blood of her noblest sons. Though there were great differences of opinion between the South and North, on the question of slavery, neither Jeff Davis nor any one of the leading men of the Confederacy would have dared to attack the North, had they not relied on the promise of the Jesuits, that, under the mask of Democracy, the money and the arms of the Roman Catholics, even the arms of France, were at their disposal if they would attack us.” Charles Chiniquy, Fifty Years in the Church of Rome, The Wickliffe Press, Protestant Truth Society, Wickliffe Avenue, 104 Hendon Lane, Finchley, London, N3., 1885, p. 388.

We are determined . . . to take possession of the United States, and rule them; but we cannot do that without acting secretly and with utmost wisdom. If our plans become known, they will surely be defeated. — ibid, p. 373.

How sad will their awakening be, when, with our out-numbering votes, we will turn them, for ever, from every position of honor, power and profit! What will those hypocritical and godless sons and daughters of the fanatical Pilgrim Fathers say, when not a single judge, not a single teacher, not a single policeman will be elected if he be not a devoted . . . Roman Catholic? What will those so-called giants think of their matchless shrewdness and ability, when not a single Senator or member of Congress will be chosen, if he be not submitted to our holy father the Pope? What a sad figure those Protestant Yankees will cut when we will not only elect the President, but fill and command the armies, man the navies, and hold the keys of the public treasury?

Then, yes! then, we will rule the United States, and lay them at the feet of the Vicar of Jesus Christ [the pope], that he may put an end to their godless system of education, and sweep away those impious laws of liberty of conscience which are an insult to God and man!
The American people must be very blind indeed, if they do not see that if they do nothing to prevent it, the day is very near when the Jesuits will rule their country, from the magnificent White House at Washington, to the humblest civil and military department of this vast Republic. — ibid, p. 374.

The papacy has made colossal fools of untold millions of people down through history, and it is still doing so today.
Tweet