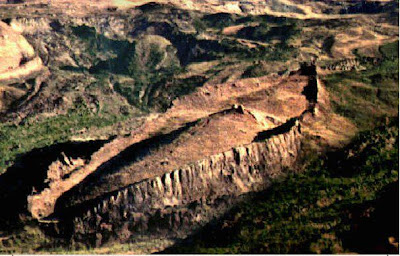 Satellite photographs taken years earlier of a boat like formation on Mt. Ararat in Turkey intrigued Ron Wyatt.
This formation had earlier been discovered by the same analyst (Dr. Brandenburg of Ohio State University) that discovered the nuclear missiles in Cuba.

While a subsequent expedition concluded that "there was nothing of archeological significance," in the formation, Ron felt it was worth checking out. He flew to Turkey and arrived at the ark site. Since the formation was mostly buried in mud, he felt it was too big a project for him. He returned to the his home in the United States and asked his friends to pray that God would do something to expose more of the ark.

Several month later, an unusual earthquake occurred causing the ark to be exposed an additional 20 vertical feet. The ark was measured and its internal structure was thoroughly mapped out with metal detectors and ground penetrating radar. The patterns clearly showed the ribs of the ark, an ~10 foot wide door near the front, two large water tanks near the front door, and large stabilizers running the length of the ship. The length of the ship was measured independently by two teams and found to be 515 feet long. Since Moses who wrote the book of Genesis was familiar with the Royal Egyptian cubit which is 20.6 inches, the biblical record of 300 cubits is exactly correct! (300 cubits x 20.6 /12 = 515 feet)

A metal detector scan showed the presence of metal at the joints of the ark. Note the regular pattern of these joints. Later the joints were excavated and the metal analyzed. Many of the joints were held together with large rivets. The metallurgical structure indicated that the makers had a fairly advanced level of knowledge of metal alloys. A computer reconstruction based upon the ruin profile showed that the original shape had a highly sophisticated profile.

The piece of petrified wood from the Ark shown below was excavated in the presence of a number of Turkish officials. This piece was sawn in several places, exposing the wood grain. Note the lamination of 3 layers in the photograph. Later analysis confirmed its organic nature. After many corroborating tests, the Turkish government agreed that the structure was indeed Noah's Ark. They subsequently built a Visitors Center near the Ark. Due to ongoing fighting between the Turkish government and Kurdish rebels, the Visitors Center and the area have restricted access. The goal eventually is to build a protective structure over the ark and begin excavations.

Later expeditions also located what appears to be Noah's first home after the flood and the grave sites of Mr. and Mrs. Noah. The graves were evidenced by petroglyphs on the large tombstones. These were within ~5 miles of the Ark. Unfortunately, the graves were subsequently exhumed by grave robbers. The Turkish government later reported that a bodice that Mrs. Noah was wearing, which was covered with large precious stones, was sold on the Turkish black market for around $75 million. One of the burial crypts was later recovered and is in a back room of a museum in Ankara, Turkey. It is 18 feet long! Enormous human bones appeared in some of the hotels in the area soon after the graves were robbed. The size of the bones suggests that the Antediluvians were between 12-15 feet tall!
Tweet